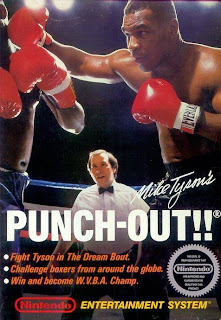 (An unpublished work for Retrocade that was finished awhile back as a 'fan appreciation' review but shortened due to page limits. One of my top 10 favorite games of my life and one of the few reviews typed off the top of my head with zero note needed. I hope you cats dig it.)

Long before his trademark facial tattoo, memorable cameos in comedic flicks, and going public with his penchant for cannabalism, Mike Tyson was not only the undisputed champ of the boxing world, but the bane of everyone who went against him in 8-bit land. Spinning off from two earlier arcade hits, Mike Tyson's Punch-Out!! is such a timeless classic that if you know of anyone who hasn't played it, e-mail me and we'll see about gathering up your oblivious pal, a sturdy chair, strong rope or wire, and a NES.

The game introduces us to an assuming, young up and comer named Little Mac, who appears to be the offspring of Ralph Macchio and Olive Oyl. Accompanied by his trainer, Doc Louis, this poor play on words of a delicious McDonalds stalwart decides the only way that he is going to become the best in the world is to take on boxers roughly six times his size. The journey from his first fight to the showdown with "Kid Dynamite" Mike Tyson is nothing short of a complete blast.

Mac is given three rounds each bout to dispatch a pre-arranged set of foes on his quest to three titles, Minor, Major, and World. In the same vein as Batman, it is the rogues gallery that truly steals the show. By far the most massive sprites the NES had seen to that point, truly giving each character that Mac faces off with an unforgettable amount of character and expression. Being 1987, there are quite a few stereotypes brought to the forefront that will make you wonder if the game would be deemed racist if released today but, hey, these were different times and as a kid can honestly say that I never wondered whether Great Tiger was hindu or muslim, he was simply Great Fucking Tiger.

A health bar is present as well as meters for stars and hearts. Each fight begins with a preset number of hearts and you lose one for a successful block and three if your opponent lands a shot. If the heart count hits zero, Mac flickers pink with fatigue and is unable to throw a punch until dodging a few punches and turning normal again. The stars represent the number of Super Uppercuts in his arsenal, Mac's special move that is thrown by pressing start. Gaining the stars can be tricky and require getting in hits at precise moments that take a bit of practice to reveal. This in itself lends to the tremendous amount of replayability that Punch-Out!! offers as I have personally played this esteemed title for 25 years and will still uncover new tricks and strategies.

Gameplay is a fun little mix of reflex and pattern recognition. First timers may be able to button mash their way past Glass Joe but will be shocked to find that Von Kaiser will shove those same blueprints right up their ass. This game is about timing and finesse and without either, be ready to spend alot of time kissing canvas. The balance in Punch-Out!!'s challenge is astounding as each fight gradually depends on that much more skill to advance. As a youngling in elementary when it was released, I can say that this was the first legend of the playground and can't remember trading tips nearly as much with any other game prior. Before Nintendo Power, there were just hive collectives of young boys who traded off the timing needed to twart Bald Bull or the blocking to counter the Macho Tornado Punch. Ah, simpler times.

Between rounds, Doc Louis gives advice and does what he can to keep Little Mac warmed up. To anyone who may find a rotund older gentleman suggestively rubbing a seventeen year old's tiny shoulder, it's shitloads better than the blatant blowjobs in between rounds of Ring King. I'm not joking, go play a round of it. Doc's tidbits can range from the useless to world-changing as I'd never have known about the Don Flamenco one-two trick if I didn't pay attention to my trainer. These interludes are the only time you're not treated to the game's tunes, which by the way are exceptional.

As for Mr. Tyson himself, think boxing's equivalent to Darth Vader. No matter who you are or what you've done, you're are utterly screwed the first hundred or so times you face him. The only way Little Mac can recoup any money is by advertising sponsors on the bottoms of his boots because within two seconds, Tyson is throwing lightning fast uppercuts that put you on your ass if they so much as graze you. Last ninety seconds of this legendary barrage of badass and things get only slightly easier. As with all things in life thought to be impossible, Tyson can be conquered with enough resolve and patience to learn the patterns he presents. Take my word for it, if you get your hand raised against this titan of the NES, that rare feeling of extreme accomplishment that will wash over you is worth every KO endured to get there. The mark of a masterpiece.