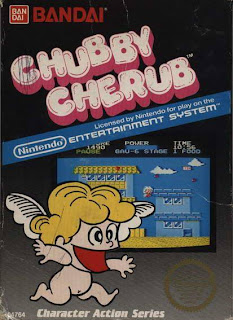 Hell yeah! Time to strap in and review Kid Icarus, a great little game featuring an adorable little angel who strikes at his foes with arrows while avoiding dastardly baddies in an attempt to...oh fuck me, this is Chubby Cherub isn't it? 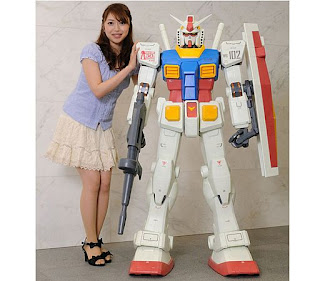 Bandai may have only reached mediocrity in video games but FUCK could they make a toy!

Another of the first wave of third party games, Chubby Cherub was presented by Bandai, a company founded in 1950 whose long translation means "We will make shit games and you will love it". Unlike Data East, Bandai never went the way of the dodo and remains a powerful force in toys, anime, and trading card games. Currently known as Namco-Bandai, one things these guys could never seem to do well would be to program a memorable Nintendo game. The catalogue of titles they were responsible for unleashing on the world is full of stinkers so is Chubby Cherub any exception? Let's all explore the answer together as this is my first ever time firing this bastard up. 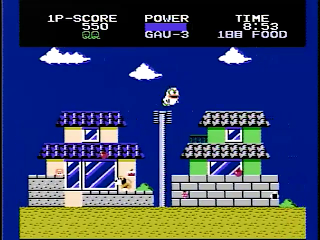 Originally released in Japan as an adaption to a popular manga, Obake no Q-taro: WanWan Panic just didn't roll off the tongue for some odd reason. Q-taro is like Casper's asian cousin, a happy little ghost who finds himself in entertaining, humorous, light-hearted situations. The little guy had drawing power and had been featured in one form or another since 1964. Instead of introducing an American audience to the likable spectral fellow, we were instead given a little angel named Chubby Cherub, which is rather strange due to Nintendo's shying away from all religious icons or drugs of any sort to a strict degree. The plot is the same in both versions but is pretty sparse. Chubby's friends are kidnapped and his only fear in this mortal plain, dogs, are obstructions on his path to rescue. Honestly, the dog thing makes a hell of alot more sense to the Cherub, as what the fuck does a ghost really have to be scared of? You've faced DEATH for shit's sake! 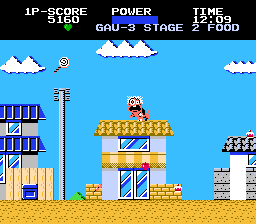 Lo and behold, this honestly isn't a terrible game. It isn't Metroid but isn't quite Tag Team Wrestling either. There are a few good points that caught me off guard as I was expecting to trash this as an abomination within minutes but the more I played, the more I appreciated what they were going for. First off, the music number played in the levels is tremendous. No shit, in a span of 24 hours I have caught myself doing laundry, cooking dinner, and waking up with this snappy little ditty lodged in my head. No small feat for any video game even if it is really the only tune available. Do you think I'm going to harp on Tetris for only having one song during gameplay? Hell no, so why do it here? The graphics as well don't present me with much to bitch about as they are bright and vibrant and the timer up top corresponds with what color the sky is which is really neat for the era. 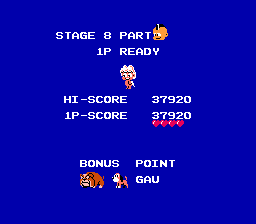 This was as far as I was willing to go with it. Best of luck to you all.

Now for the cavetching if I may. While the graphics and sound I found pleasing to the eye and ear, the controls can be slightly of the left of fucking insanity. Remember in the SNES classic Super Mario World the reward for learning how to fly like a master was that you could hover over entire levels on top of impressing the shit out of your friends? Well, Chubby Cherub strips it down to nothing and makes it to where it is as easy as Sesame Street 1-2-3 to fly over a level as long as you keep eating the fruit that is present every other pixel. Sure, every now and then, a dog will bark the letter "B" your way(!), but they take little effort to avoid and the only real challenges here are either the close to impossible bosses that randomly show up throwing bombs like there's no tomorrow or having to shoot something to get it out of your way. The only reason shooting is a whore is because you have a limited supply of arrows and their range is nothing compared to your enemies. It's like going against a trained sniper with a .22, the shit just doesn't work. Also, if there comes a time when Chubby needs to drop from the sky to ground level, you have no control over the descent whatsoever so if a dog, cat, or owl wants to veer in your path in the meantime, you're toast. 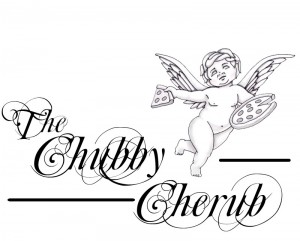 In Belfast, it's a pizza joint!

THE FINAL VERDICT
5/10 Smack in the middle of the NES lovefest is Chubby Cherub. It had potential to be an IP that could've spawned a few successful sequels if they stuck with it, but alas, it wasn't meant to be. Ironically, Q-taro also petered out around the same time overseas so that could've had alot to do with it as well. Say hi to Stanley and Mach Rider for us! 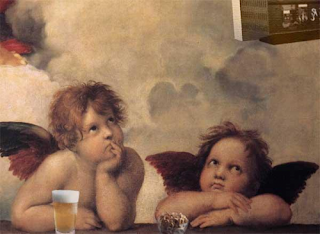 "I could've been a contender. Fuck it, it's Miller Time."