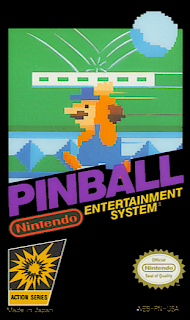 
What's the only game where the box art is based off of a bonus game and contains a reference to the Nintendo of the 19th century? Let's check out my landmark tenth review (tongue-in-cheek, folks) and take a gander at another Black Boxer, Pinball! 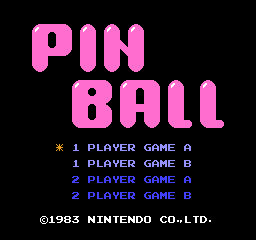 Kind of a neat bubble gum effect on the title.


It's hard to pinpoint the exact origins of the game but traces of it existed as far back as the 1700's in the popular game, Bocce. A ball was rolled down a hill and the object is to bounce it off of certain targets, some good and some not so good. Later on, it evolved into more of what we see today with spring launchers and paddles, creating more of a strategy to go along with it. By the time arcade machines rolled around, pinball machines were very intricate, electronic, colorful, quarter-chomping beastasaurs. While gaming was still in its infant stages, Space Invaders just wasn't as pleasing to the eye as the blinking lights, booming sound effects, and differing levels of challenge that the tabletop pinball games of the era supplied. It had to be like having the choice between a cheese and wine tasting versus hitting a rave. Everyone stuffed a few pieces of Gruyere in their pockets, grabbed a Merlot to go and hit the REAL party! All parties must end, so once the video game boom hit its stride via Pac-Man, Frogger, and the like, the bustling pinball business started to fall off as more consumers wanted to dig into this new hobby where you could do a whole lot more than strategize a hundred different ways to make a steel ball ricochet as intended. 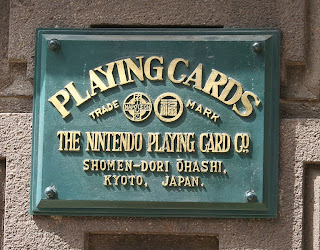 Where can we make the most money guys? State of the art gaming consoles or a hardcore Bridge tournament?


Enter Pinball, an arcade port faithful to the likeness of machines of its day. Everyone knows what pinball is and how it is played, just like Baseball so I won't insult anyones intelligence by explaining the rules at great length. Pull the plunger and try to avoid the virtual steel ball's fate of falling into an enigmatic, bottomless pit located in the abyss-like bottom. There are two levels of this particular table, each with their own bumpers and goals that can be accomplished. The top board has a sort of bizarre sea animal theme with seals and penguins being ways to rack up points. The bottom board is far more intresting as it has an awesome call-back to Nintendo's true roots, playing cards. Some of the casual visitors here may not know it, but Nintendo was founded in Kyoto, Japan as a producer of playing cards, a business they quietly continue to this day complete with an annual bridge tournament. Continuing on with the game itself, the bottom board also contains chicks you can hatch and 7 side bumpers to aim for to release an awesome bonus stage. 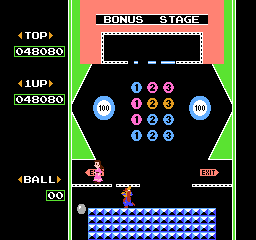 
The bonus stage was the selling point and if anyone ever needed proof that Mario was their intended golden boy from the get-go, this is it. You play as everyone's favorite Italian plumber in a Break-Out style game to release the damsel in distress from Donkey Kong, Pauline. One may safely assume that this game's events took place before Super Mario Bros because Pauline wasn't heard from for another 19 years as Mario hooked up with Peach and never looked back. Bounce the ball into the walls enough times and she is freed to be caught by the platform, where she is figuratively shown the door until Mario Vs Donkey Kong 2 on the DS. There were two game modes in Pinball, the only difference being that in the second mode, the ball moved faster, adding to the challenge. 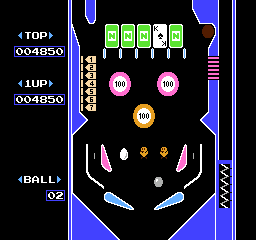 Anyone have a clue what happens if you get all the cards? I don't think in all these years I ever have.


THE FINAL VERDICT
7/10 This is an ageless, timeless classic and is one of the easiest early titles to pop in and instantly start playing. The rating is such because even with the hardware's limitations at the time, another table or two could've easily been added. Some reviewers have given lower scores due to it not being like actual pinball, to which I say, no shit. That's like me complaining that I didn't like Super Mario because the mushrooms I eat taste differently and don't make me grow twice my size. The ball mechanics are perfect, the sound effects are sufficient, and it has that magic work that makes a game worth playing, fun. Which is all you really need right? 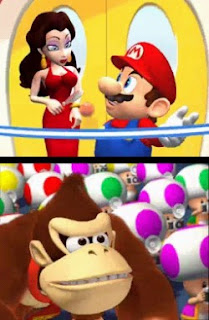 "You mean I dyed my hair brown, whored myself up in this dress, got implants, and you STILL don't remember me? I knew I should've called Luigi when the gorilla captured me! HE should be the star today you ungrateful bastard!"