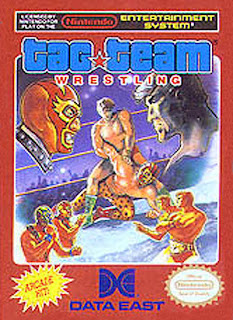 When I reflect on the zany world of professional wrestling (and trust me, I can tell you a thing or two about that freakshow), many of my favorite moments dealt with the many colorful tag teams. There were far too many masters of their two-on-two craft that it would be impossible to name them all here, but just to throw out a few, The Road Warriors, Demolition, Ole & Tully, The Midnight Express, The Hart Foundation, Hansen & Brody, The Dudley Boys, The Ricky Fighters...The Strong Bads...wait, whutdafuck? Ricky Fighters and Strong Bads? Who were they? What were they? Not the slightest but they were badass enough to head the charge when it came to 'rasslin' on the NES so today we share a peek at Tag Team Wrestling. 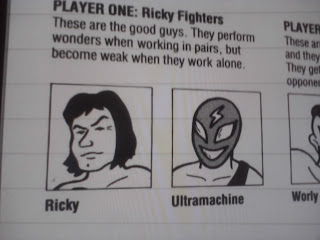 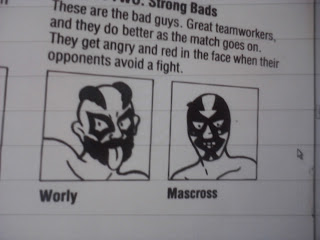 In all their "glory", straight from the manual

Nintendo up to this point had published every single one of the available 27 titles for the system. As always, there comes a time for the parents to let the kiddies play with the big boy toys and voila, third party games were being produced. One of the first companies out of the chutes was Data East, an arcade/pinball company founded in 1976 who knew to strike when the iron was hot. What mighty title did they use to impose their will upon Nintendo players the world over? A port of a game that already sucked the balls of a diseased platypus in the arcades for over a year that's what! 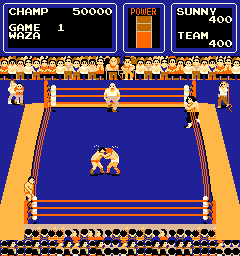 Let's port this game that has already been established as horrible! FUCK YEAH!

So, in a world where every major tag team is tragically killed in a bus/train/plane crash, we are stuck with two of the most ridiculous sounding duos in history, The Ricky Fighters, consisting of Ricky and Ultramachine, squaring off for all eternity with The Strong Bads, a fearsome twosome of Worly and Mascross. Right away the team names don't sound all that bad when paired up to the individual's names. In a twist of irony only video games can produce, Strong Bad would go on to become the name of a popular character in the hit Flash animated series, Homestar Runner. 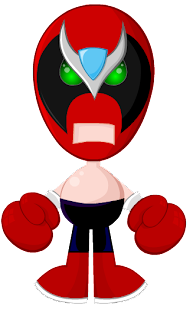 If you're a fan of this guy, thank Tag Team Wrestling.

If you've ever played this broken sack of wet hobo turds, then I'm sure you understand why I am going to keep this brief. Quite simply, there is no worse wrestling game in history. Yes, I'm aware M.U.S.C.L.E. exists and actually have it on deck soon, but it is like Fire Pro next to this dreg. If one said to me that this was a 13 year old programming student's first project, I'd be likely to believe it as well as said student having a D average. My favorite part is when a character has to run because he resembles a fat zombie trying to give a case of the ooga boogas rather than a mat warrior destined for battle. Win or lose a match and be delighted by the sound of white noise that harkens back to the days of old televisions left on overnight and scaring you half to death in your sleep when the station signed off. Perhaps I dated myself with that reference so you young kids, just youtube white noise like everything else in your lives and you'll be fine. 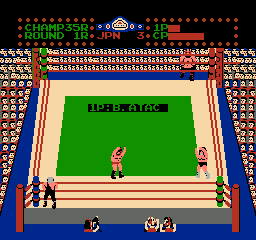 The controls are non-existent. That isn't me trying to be funny. Zero exaggeration. Non-fucking-existent. Going into a collar and elbow tieup, instead of using the controller to make shit happen, if a move is somehow pulled off, a menu comes up where you are given a set number of time to choose what move in your huge repertoire you'd like to inflict on a Strong Bad. How this is accomplished is never explained and don't tell me to get a manual and figure it out. I have one of the motherfuckers and it doesn't give clue one how to go on offense. Even without a manual, this was one of my first games, as you could've boxed up anything with the word wrestling on it back then and I was content, so I've had over 20 years to figure it out. Non-existent. Kid you not, the manual tells you how to advance in rank, how to pin, and how to kick out and that's about all. 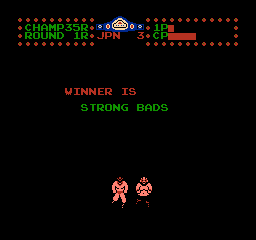 A Winner Is You! Sorry, wrong game.

THE FINAL VERDICT
1/10 Donkey Kong Jr Math is the only other game to reach the bottom of the bowling alley toilet so far. Yeah, Urban Champion was a piece of shit, but it was playable. Sure, Stack-Up was damned near broken due to R.O.B., but that was a marketing ploy going in, this was a game going in. Graphics, sound, controls, fun, and being a fucking game are the things Tag Team Wrestling fails at in every possible way. Big ups to Nintendo because if I was a musician and wrote nothing but smash hits and the first song I let someone else write for me was Rebecca Black's "Friday", I'd have serious apprehensions about allowing another writer into my life. The Big N, however, must've just known that it was all uphill from here and kept the third party train a-rollin'. 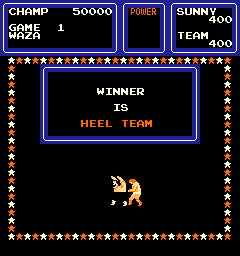 In a rare case of dropping kayfabe in the 80's, the arcade version just comes out right and calls you faces and heels. That's kind of awesome actually. 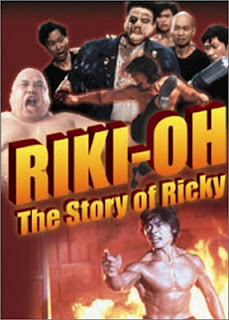 TAG TEAM WRESTLING: THE MOVIE! Yeah, I know it's unrelated but found this and thought it'd be awesome as an unintentional mock-up to share!