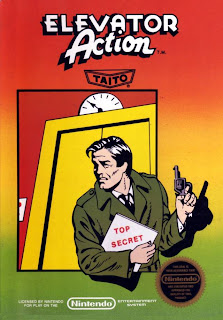 Have you ever heard whispers of a legendary game out there that you've never played? One day, the moment of truth arrives, you procure a copy of what is sure to be a masterpiece in your collection for years to come, pop that sucker in and get to work. Sometimes, it can be pure magic akin to scoring with that legendary hottest woman in the club. Other times, it can feel something like said hottie in your bed revealing that she has a much larger dick than you do.

Originally released by Taito in 1983, the arcade port of Elevator Action didn't hit the Nintendo Entertainment System until August of 1987. The gist of this little gray square of dookie is that a master spy/secret agent/badass named Otto aka Agent 17 must infiltrate 30 floor towers built by rich eccentrics with a penchant for elevators and escalators and grab secret documents while avoiding a ton of Judge Doom lookalikes. For such a master infiltrator, I find it hilarious that we all know his real name in addition to the fact that Otto is the only person in the game not dressed in all black.

What makes this a festivity of feces you may wonder? Let's start with the fact that Taito had two years to master the quirks of NES programming and the absolute best they could muster was a game that harkens back to the Atari 2600 in terms of quality. As all of us fellow retro fanatics are aware of, graphics never make or break the fun and replayability of a game but during a time when gaming was trying to evolve, there was no excuse for the graphics to be this poorly executed in the very same month that saw the debut of Metroid and The Legend of Zelda.

Surely with eye-candy that could be the NES version of "Plan 9 From Outer Space", the controls couldn't be as awful right? Wrong, they are SPECTACULARLY awful. Otto jumps in a motion so choppy that it forced me to recall the days when the internet would stream video via dial-up though Windows Media Player 1.0. As if the poor guy's dignity wasn't already shattered enough, when he does slowly "jump" he throws his ass rather invitingly in the air. Mix that in with the way he vigorously humps the rope as he enters the building and we have ourselves a not-so-subtle cocktail from programmers who may have been more bent on alternate lifestyle humor than, you know, making an actual playyable game to take pride in.

While riding down the abundant elevators and escalators, baddies are trying to make life difficult, but there are a few ways to fight back. A straight out gunfight is preferrable once you get past the idiocy where you can't crouch inside elevators and must press up again to stand if ducking to fire. Other mechanics can be utilized such as trapping them under the elevators (strangely causing them to die Pac-Man style) or shooting a light fixture to land on the enemy's head. No lie, I spent an hour trying to land a light on an antagonist's noggin to no avail, so I wouldn't recommended it. The main goal as you traverse the bizarre buildings is to enter every red door you see and snatch up secret documents. Miss a single briefcase and when you hit the ground floor, the game really sticks it in and breaks it off sans lube by shitting you right back to the very top to go through 8-bit hades all over again.

Enemy A.I. is somewhere between the Keystone Cops and Three Stooges in terms of acumen and the only time they seem to have any wherewithal is if you linger in a stage too long. It would be infinitely more exciting if they started out from the get-go by going batshit as you can go through half the building before seeing that "action" thingy mentioned in the title. Make it to the bottom and Otto rides off in what appears to be a child's first big plastic car and rides off to the next building. We don't even need to go over the sound as there is one song on a 7 second loop the entire time that will make you dive for your My Music folder before sterility kicks in. Effects are just as hideous and are the worst on the NEs since the fabled Action 52 cart. Marvel as your NES spits out bleeps and blips that even our friend the 2600's sound chip would've been embarrassed about.

With such tremendous ports already made for the system such as 1942, Gradius, and Popeye, this felt like an unlicensed cart. Lazy, uninspired, and a mockery of the not-so-bad original arcade game.

(No, I'm not changing the format of the reviews. This is my work from Retrocade Magazine Vol.2, Issue 1 in its unedited full form. Today will be a collection of work done outside the site before the new material drops. I know alot of you haven't seen this and I think it is one of my best so enjoy!)