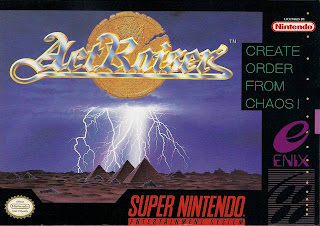 (My pick for Review A Great Game Day awhile back. Special thanks to Eric Bailey for helping me with the confidence to do it again.)

As much as I cavetch about horrendous games and throw virtual rotten tomatoes ad nauseum, today, I'm going to share with you cats and kittens one of NESquester's favorite titles that I never have had the chance to speak of before, Actraiser.

Many moons before the amalgamation of genres we see today such as Borderlands and Mass Effect, Actraiser was a pioneer in the genre-mashups. One part overhead simulation, one part action game that has made many an expert's hands sweat, Actraiser was one of the earliest SNES titles and being the huge Square & Enix (to the kiddies in school, at one time, they were as different as Microsoft and Sony) fan I was, bought it on a whim and every penny and then some has gotten its mileage.

It is so hard to discuss the magnum opus of Enix action games in as there is no doubt this could hit 5 pages before I realize it. What do you wish you know about? The graphics? For 1991 and even quite a bit beyond, from the lush planetscapes, the unforgettable crystal dragon, to the final boss battle, the graphics are flawless. How about the sound? Oh, baby, how about it! This soundtrack is one of the greatest on any system, any year, any day of the week. It legitly sounds as if they snuck a tiny orchestra in each cart, it is THAT tremendous. Is it any fun? Actraiser boasts one of the highest replayability scores in history. Once a year without fail, I strap on my blue winged helmet, grab my trusty heaven sword, and get to whipping on some Tanzra booty. Another wonderful part is between the and action sequences, neither of them feels too long so you don't spend the action sequences muttering, "Okay, enough of this crap, time for the sim," and vice versa. Lastly, the story. Magnificent. Your character is basically God (I didn't make the game folks), who brings an angel with him to help make the world a better place for people. The emotional attachments you'll gain for a lost, hungry boy named Teddy and a disease ravaged man you send rain down to "cry for" are moments that will stick with you for a lifetime. The angel communicates and explains to the confused deity as the story goes why the humans are doing certain things and acting certain ways like causing wars and the like. A truly touching and fascinating game from a human perspective and beautifully written.

Actraiser was a spiritual successor to another lauded Enix title, Soul Blazer, which had its own sequels. Actraiser 2 was released a few years later but without the simulation sections and an even more ramped up difficulty, paled in comparison to its original. If you've never played Actraiser, by all means, make it a point to play it at least once and you'll be rewarded with a very challenging, thought-provoking, true gem of a game.
Posted by Unknown at 9:52 AM