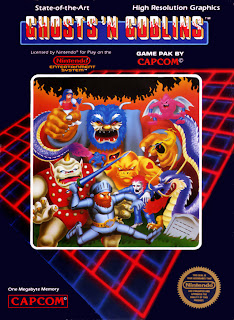 I consider myself a firm believer that once a year, a crack team of sadistic programmers converge into one small room in Japan and collectively decide that they hate gamers passionately and wish to make them suffer. In 1986, this crew of evil, hell-bent geniuses crafted a game that today still haunts those steadfast in their resolve to conquer everything 8-bit. That game was Ghosts N' Goblins. 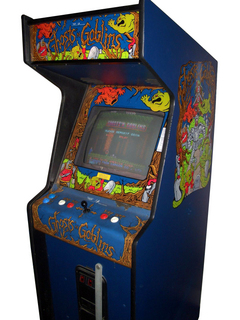 This was hands down one of the nicest looking cabinets at the time.

Thrust into the world to annihilate unsuspecting gamers around 1985, Ghosts N Goblins was one of Capcom's earliest franchises. For those of you who have possibly spent the last two decades living in an Amish community, Capcom is one of the largest, most revered game companies around whose portfolio includes such household names as Megaman, Street Fighter, and Resident Evil. As with most early arcade games not made by Nintendo, production notes are completely impossible to come by so let's take a brief peek at the founding of Capcom. 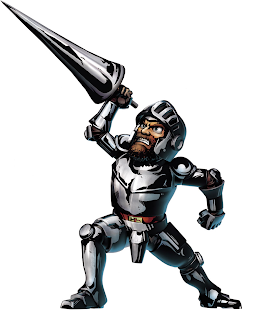 "Everyone who thinks Cloud and Sephiroth have the gnarliest weaponry in gaming has never had THIS shoved up their ass! Spreads as it goes for that extra ouch!"

Founded in 1979 as I.R.M Corporation, coupled with its subsidiary Japan Capsule Computers, the two offices dedicated themselves to the creation of electronic games. Both companies merged to create Sambi Co Ltd in 1982 which was established as the now familiar Capcom one year later. Capcom is short for CAPsule COMputers, which, at the time, was how the company commonly referred to arcade cabinets. Their first offering was a decent little shooter named Vulgus in 1984 and within a year, Capcom was steadily becoming a rising star with their next few arcade offerings, the previously reviewed 1942, the soon to be reviewed Commando, and the merciless son of a goatfuck we take a look at today, Ghosts N Goblins. After porting 1942, Capcom wisely realized that consoles were going to hold a huge place in the future of gaming and never looked back. Now, if they would quit trying to shove hot pokers up gamer's asses these days by sticking tons of DLC on game discs that are already bought, they could probably become as beloved as they once were. Licensing out their top franchises to untested studios like RE: Racoon City and DmC probably didn't help their status in the recent public eye either but I digress. 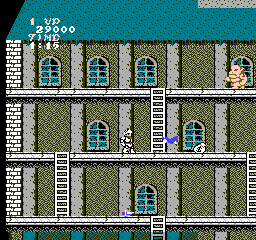 So, we've ALL heard about how legendary the difficulty on this medieval rescue mission is. The cake is real ladies and germs, as this is as trying of a title as the early days could possibly fathom. Two hits, you're dead, get any weapon other than the knife, you're dead, stand there a second too long, dead, ponder a troubling spot too long without watching the timer, you're fucking dead. Ghosts N Goblins could've just as easily been titled "Watch This Funny Little Fucker Die 10,000 TImes" without any reservation. The elephant balls-toughness of the entire experience is well documented so what else does the game offer? To start, it is one of the most faithful ports ever produced as everything is EXACTLY in its place from the arcade version. Noone moves any slower or faster and the placement of just about every little nuance is presented in nice, vibrant 8-bit awesomeness. The stages are varied enough to keep things intresting but, trust me, unless you're staring down screenshots, you'll never have the time to fully appreciate how nice it looks for such an early title because you're constantly working on that whole not dying thing. Sound ranges from sufficient to some blips and squeals that become unforgivingly annoying at times. To be honest, sometimes the effects could become so grating to my soul that I'd try to haul ass out of an area only to quickly be transformed into a pile of picked clean bones. If this was the intent of the programmers, then they were genius beyond our understanding at the time. If it was by folly, fuck it, it still works. 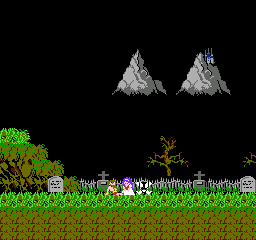 Seriously, he looked just a moment away from knowing if the carpet matched her very blue curtains.

The goal here is to have a little ginger knight with a hell of a beard named Arthur rescue the object of his desire, the aptly named Princess..uh..Prin Prin. Prin Prin is kidnapped by Satan himself at the beginning of the game right when some hardcore nookie was about to go down. Don't believe me, look at the screen and tell me Arthur wasn't about 5 seconds from insertion before that damned demon ran off with his slice of ye olde british pie. SO blue balled and rightly pissed the fuck off, Arthur hones his horniness into a rage-filled throwing arm and sets off through six impossible stages to reclaim his priceless cooter. Along the way, he encounters some serious shit like zombies (pre Resident Evil Capcom zombies!), trolls that take as many hits as a boss to kill, and even little versions of Firebrand that will drive the most hardened gamer bonkers. Was Super Meat Boy too easy for you? Dark Souls became your bitch within a few days? Mike Tyson never make it past the first round with you as Little Mac? Then play Ghosts N Goblins while hooked up to a heart and blood pressure monitor to see what we all mean. Stages end with a boss which could either be the "Unicorn" (looks more like a cross between WWF Tag Team Demolition and X-Men villain Wendigo), a dragon that is easier than most, or Satan himself. There are a few weapons at your disposal but if you aren't using the knife, you're wasting time. Speaking of time, the most unfair part of this bastard is the timer you are tasked with beating each level. There will be plenty of times that you'll run that bad boy out simply trying to think of ways to get past whatever puzzle lies ahead of our poor doomed knight. At least there are continues which helps if you have the patience to conquer this beast of burden but it can be like having infinite tries to lift a Mack Truck with your lower lip. Yeah, you can make attempts all day, everyday, but chances are slim and none on the acheivement being met. If you do make it to the ending credits, make sure and attempt human flight and time travel next because those are just as plausible to attain. Don't forget that this migraine inducer also has one of gaming's greatest pranks included as once you think you beat the game, it is revealed to be an illusion devised by Satan and you get to play the entire fothermucker over again. In other words, when you see the final bosses' first incarnation defeated, hide the razor blades kiddies. 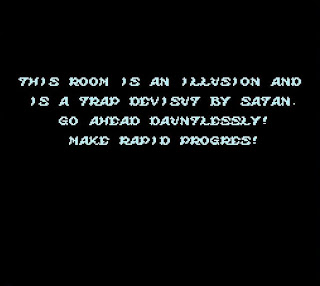 This screen was responsible for 92% of gamer suicides in 1986.

THE FINAL VERDICT
8/10 A very ambitious title for its time. The multiple stages and animations were ahead of the curve and no matter if the difficulty was locked onto "Motherfucker!" (the order goes Easy, Normal, Hard, Broken Controller, Motherfucker!) it was fun to play and though people may gripe about it being harder than Grandpa Joe after his first Viagra, everyone knows it and everyone has played it, making it an instant classic. The only things that keep it from obtaining a higher score are the sounds and slow down from time to time which can mean cheap death in a game already stocked to the brim with them. 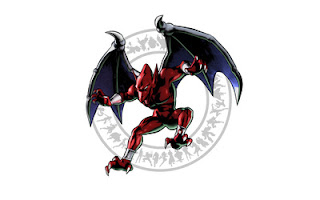 Funny how this little guy was such a bastard that he got his own series and retains a decent amount of popularity to this day. Isn't it strange how one minute Nintendo was all "NO RELIGIOUS STUFF WHATSOEVER" and the next we had Satan himself in a game and one of his sons, Firebrand, getting his own series?

Since then, Arthur has been no stranger to gaming as the franchise has spawned quite the library of games and spin-offs. Gargoyle's Quest follows Firebrand on his own missions and Maximo for the PS2 is set in the same world. The direct sequels are just as daunting to defeat as the rigid ardousness of the original became a staple of the franchise. Arthur and Firebrand also show up in Marvel vs Capcom 3 with an epic tribute to the first stage of the NES game as one of the backdrops. Anyone with a copy of that Ultimate Ghosts N Goblins for PSP, feel free to e-mail me! 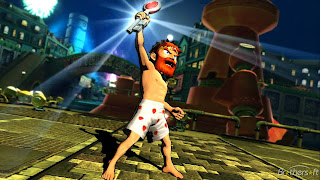 "EXORCISE THE BALLS OF BLUE!!!"