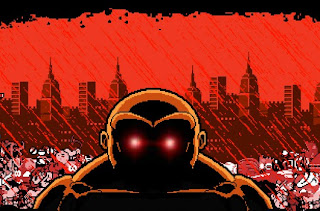 What better way to spend a lazy afternoon is there than with a labor of love crafted by a team of die hard Nintendo junkies that half the world hasn't played yet and the other half is still picking up pieces of brain matter off the floor after experiencing it? Without a doubt, the greatest homage ever to grace our computer monitors, this "side-quest" isn't just any mission, oh fuck no, THIS is Abobo's Big Adventure. 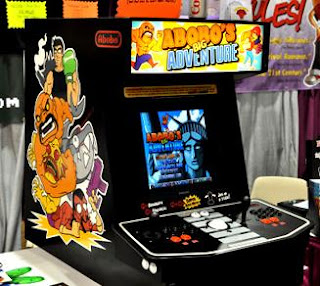 I would send the cutest kitten ever to grace the planet Earth screaming over the Grand Canyon to have this in my living room.

Abobo's Big Adventure was first developed as far back as 2002 by I-Mockery founder Roger Barr, a true NEShead in every possible sense of the word. Side-projects and other ventures caused the games production to come to a halt until around 2006 when Barr, “Pestoforce”, and "Pox" restarted the project from scratch, wishing it to feel like more of an 8-bit game than the previous attempt. The team went through the formidable task (I'd know!) of playing through the majority of the NES library and jotting down a mind-staggering amount of characters they felt deserved inclusion in the game from household names like Donkey Kong and Little Mac down to the unsung heroes of the era such as Kid Niki and Clash At Demonhead's Tom Guycott(!). Debuting the first levels at 2009's SDCC, word of mouth of this insane little game-that-could spread like herpes on a batch of Hulkamania "vitamins". After a few years of lugging a custom-made arcade cabinet around the country to keep the momentum going as well as being friendly, approachable dudes, (I'm looking at YOU Phil Fish), Abobo's Big Adventure was unleashed on the world in its flash form on January 11, 2012 and after awhile was available for free download to both PC and Macs. Enough of this chatty shit, let's get to the meaty part of this 8-bit taco shall we? 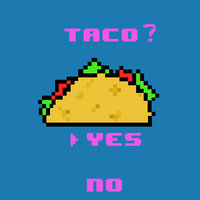 Right out of the gate, the title screen clues you in that this is going to be a one-of-a-kind experience starring all our old friends we hold places in our hearts for and have missed over the years. Hearing the familiar Megaman 2 theme as  the screen scrolls up the Statue of Liberty to reveal our hero will cause anyone who lived through the era to wax nostalgic automatically. For the uninitiated, Abobo was the one motherfucker in Double Dragon you did NOT want to run into. There are white, black, and even green varieties of this monstrosity and the only way I could ever figure out how to beat the unholy bastard was by jump kicking him 15 times. Yes, to this day I remember precisely how many boots to the face it took. World 3 of Double Dragon turned many a' boy to man when two of these terrfying stuffed sacks of moustachioed muscle tore through a rock wall and commenced to whoopin' that ass but good. 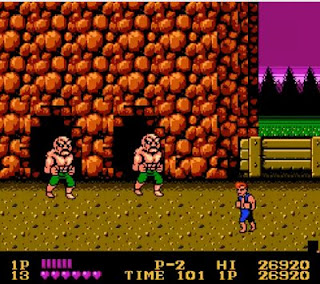 The precise moment in DD where you realize you're totally fucked.

Upon pressing start, the scenario of the game is presented as only awesome 8-bit storytelling could pull off, a vibrant little cutscene informing us of everything we need to know going in. The offspring of our protagonist, Aboboy has been kidnapped and Abobo is so pissed about it that he annihilates a small kitten before you can even control him. This sets the tone for the copius amounts of blood on top of the dark humor liberally spread throughout this epic journey. 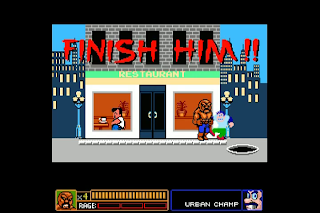 This could be the only mode in the game, and this scene alone would put it near my Games of the Year. I've waited over 20 years to rip this worthless excuse of a fighter to shreds.

Eight levels are present throughout, each a spot-on mock-up of a different retro game filled to the brim with more NES characters than could ever be listed. No matter how obscure and unknown a title, I promise you there is someone from your personal favorite nostalgic little grey cart buried in there somewhere. To mention every single cameo in this game would require a list longer than sports stars that have penetrated Kardashian twat, so suffice it to say, they are here. 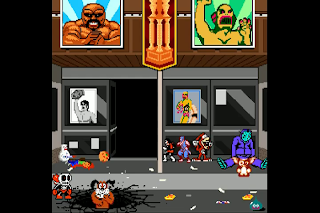 If this is surreal enough to make you triple-take it, the ENTIRE game is like this. It's virtually a playable who's who of the 8-bit dynasty.

The graphics are perfectly represent for the games parodied and even more impressive, the controls are DEAD ON. If you replaced the real Balloon Fighter in his original game with Abobo, it would without question feel exactly the same. It is a testament to the passion the development team had for the source material to have emulated it to this degree. Sound effects are just as incredible and sharp-eared retro fanatics will wear a permanent grin at the little touches they put in ranging from Soda Popinski's laughter to the Excitebiker's revving engines. The toughy to rate here is the challenge as it all depends on how much you played the originals they were based on. If you are a Punch-Out enthusiast like myself who has easily thrown down hundreds of hours dodging and counter-punching, the end sequence may not prove so taxing but if you never spent one minute inside Little Mac's shoes back in the day, I can understand why that stage would just destroy any novice with the quickness. 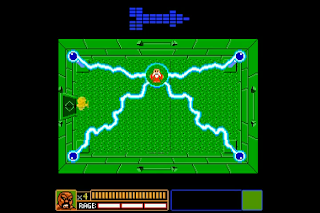 God of War II's Colossus of Rhodes be damned! THIS is the definition of an epic battle!!!

If that wasn't enough to sell anyone reading to download this about five lines ago, Abobo's Big Adventure is the funniest game of its kind you'll ever have the pleasure to play. From getting to seperate the Urban Champion's head from his torso Mortal Kombat style, Amazon of Pro Wrestling fame taunting you Handsome Jack style through an entire level, or the greatest ending scene a game has ever sported, the laugh out loud moments are as non-stop and rapid-fire as Team Abobo could've possibly thrown them in. Cutscenes are hellacious romps through 8-bit memories and it wasn't above the creators to toss a little non-NES humor around as well. They fuckin' owned me with the Johnny 5 is alive line and that's just one of a butt-sack of tremendous gags. 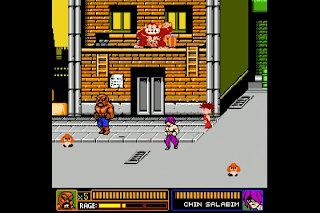 Words escape me for how awesome these non-stop moments become. Even if stricken with Alzheimer's to the point of forgetting my own name, I'm sure I'll be able to recall Abobo vs Donkey Kong.

The crowning achievement of this magnum opus is the replayability. Every new playthrough will come moments that weren't noticed on previous conquerings. I've beaten this more times than Lohan has been in court this year, but never fail to catch new things, For example when playing the real Contra, I avoid the "L" power-up like Perez Hilton avoids pussy, but picked it up accidentally only to find the fucker fired LEMMINGS across the screen. It's those magic moments that make this the cream of the crop and the measuring stick that retro themed titles that followed only wish they could pull off. Medals are even thrown in the mix for the current gen feel of trophies or achievements and getting them all becomes the most exciting war of attrition between you and your PC controller you'll have for a long time. I found this part of the replayability factor so valuable that if Raptr ever synced itself to emulators and needed someone to come up with achievements for every NES title in the library, I wanna be the guy! #seewhatididthere 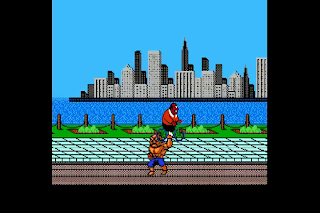 No pink hoodie bullshit here, Abobo trains like a MAN.

THE FINAL VERDICT
10/10 Don't rub your eyes or rush to come down off of whatever hallucinogen you may have taken this morning with your coffee, that is the fabled perfect score that only Metroid and Super Mario Bros have received since I began reviewing. As a game, Abobo's Big Adventure is nearly perfect. As a love-in for The Big N, it surpasses anything you've ever seen before or since. If you've never taken the time to marvel at this jewel of a game, put down the Blops2, Halo, and Mass Effect for a day and prepare to have your brain blown right through your ass. The bar has been set and it would take a modern day miracle for anyone else to come close. Abobo's Big Adventure deserves to go down as one of the greatest games in any decade, any genre, and on any system. 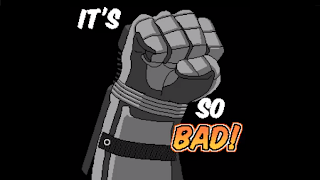 If you make it to this screen, get your seatbelts locked and prepare for the ride of your fucking life.