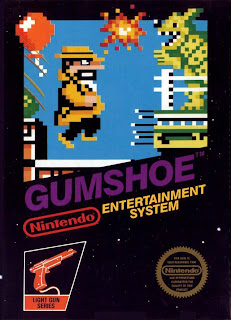 Suprisingly, the Light Gun titles to this point have trumped the Sports Series in both quality and fun, two very important factors when deciding the purchase of a new game. Let's see if the streak stays alive with the most original of the titles to date, as well as the first Black Box game NOT released for the Famicom, Gumshoe. 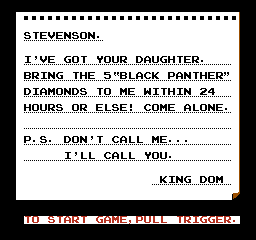 What's this nonsense I see? A storyline in an early NES game?

In Gumshoe, you take on the role of the grzzled Mr. Stevenson, a bearded, flasher looking chap who thought highly enough of the FBI that he quit and became a detective. Intresting note, the designer, Yoshio Sakamoto (Metroid, Kid Icarus, Wrecking Crew), pulled a fast one on Gunpei Yokoi and purposefully made Mr. Stevenson a close resemblance, so when the game was being tested, things got uncomfortable quick. Yokoi and Sakamoto were close friends so the squirmness was mostly brought on from programmers and testers being paid to blast their boss in the ass in his presence. So the storyline goes, as with every FBI agent unlucky enough to have a daughter, she was kidnapped and held for ransom by King Dom. How every major comic company didn't come up with something as corny as King Dom in the 60s and 70s escapes me. The don is willing to exchange Mr. Stevenson's pride and joy, Jessica, for 5 "Black Panther" diamonds and we are off and running. 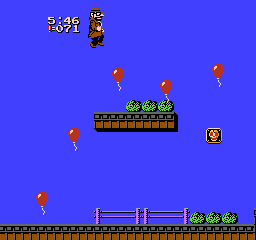 Sooner rather than later, those cute balloons are replaced with certain death.

Of all the Zapper games, Gumshoe seemed the most promising at first glance. Mr. Stevenson moves in constant motion towards the right not stopping for anyone or anything. The only way to make him move is to shoot him, causing him to jump, which would be cool if it were easier to gauge where he would land. Sometimes, he will come down to Earth safle, but most of the time will shoot directly into floating skull heads or lightning quick birds that can be gunned down. By the time you hit one of these avian assholes, it's usually too late and the detective is well on his way towards cement at terminal velocity. As if that wasn't hell on earth enough for the player, later stages throw out some of the cheapest deaths seen by human eyes with sharks, airplanes, and a sort of dog/armadillo that must be shot multiple times to kill littering the playing field. Limited ammo is given but never becomes an issue as it doesn't subtract when Stevenson is hit, only if you miss or shoot at an obstacle. None of this makes any kind of a shit in the long run, because the game ranges from unholy fucking hard to unplayable. I'll be the first to admit for the first time ever during a review, I tried to cheat my ass off and still only made it to level two. It's harder to give an honest review of a game when the physics behind it are simply indescribable. Sure, he hops when you hit him, but the gun recognition (non-emulator) hardly ever reads a hit half the goddamned time and EVERY shot here is crucial. ROM junkies, want to impress the NESquester? Show me a picture of the end of this game and I'll ship you an old school Marvel No-Prize. 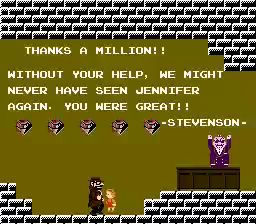 If it wasn't for Youtube, I couldn't ever be convinced that this screen isn't a myth.

THE FINAL VERDICT
3/10 As original of a concept as this was and kudos to Sakamoto for thinking outside the box, this game is of my least favorite genre, the fucking impossible. Conquerable with a deep learning curve and hours of trial and error like say, Ghosts N' Goblins or Ninja Gaiden is one thing but unable to get through no matter how much I shoot directly at the screen, press shift+1, or go to the "Genie" is inexcusable. Admittedly, I am curious how this style of shooter would fare today but in 1986, it was an experiment that failed bringing no shock to me why Gumshoe was all but forgotten. 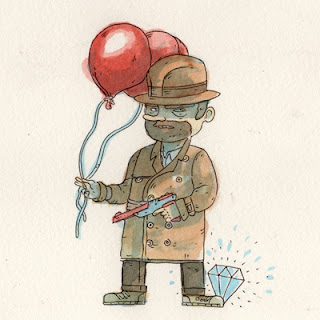 Fuck the Slender Man, if this wasn't attached to a game, it would easily be the creepiest picture ever.