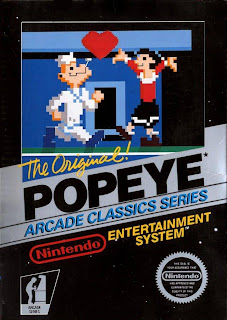 One of the most regonizable figures in American pop culture as well as the original premise for the game that became Donkey Kong, today we take a nice, long look at a game that was another arcade port of a Miyamoto smash hit, Popeye.

Unlike the many revamps other character go through nowadays, Popeye remains practically unchanged from his very first appearance.

Popeye began as the brainchild of writer/artist E.C. Segar. Making his debut in 1929 in the popular Thimble Theater newspaper strip, he was a minor character at the start. Popeye was just a sailor hired by Olive Oyl's current boyfriend, Harold Hamgravy to captain a ship to an island to thwart an evil casino operator. His adventures were meant to end there, but readers took such a huge liking to the oddball that he was quickly brought back. 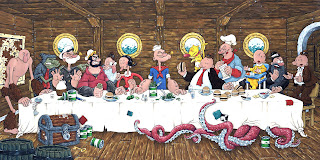 Popeye easily sported one of the most unusual, yet awesome supporting casts. Not just of his time, but ever.

As the years went on, the strip evolved as Olive left Hamgravy for the goofy sailor, a baby named Swee'Pea was introduced, and Thimble Theater quickly became the Popeye show. A plethora of weird shit began debuting as well such as Eugene The Jeep, the Sea Hag, and the burger hoarding Wimpy. The comic strip and the cartoon that followed had little in common as in the funny pages, Bluto was only featured once and spinach was a rare plot device. Both being commonplace for Popeye mythos shows how powerful the medium of television was at the time. The animated version was done by Fleischer Studios, the same crew who also created the most beloved of Superman cartoons right around the same time. Strangely enough, Popeye debuted in that form alongside the famous Betty Boop in 1933. To this day he remains a household name having his unique mug plastered on everything from lunchboxes, t-shirts, and even his own line of spinach. Robin Williams portrayed the live-action version in 1980 and to this day, the town built as the set of the movie stands tall and is one of the largest tourist attractions of the Island of Malta. 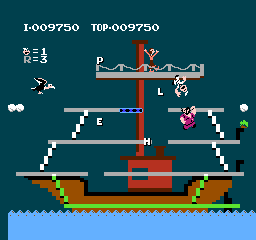 Did that motherfucker just TIGER UPPERCUT me?!?!

Should it be any suprise that Shigeru Miyamoto loved Popeye? Weird met weird to create awesome in the NES port of a 1982 arcade classic. You control the affable sailor throughout three repeating levels, catching whatever icons Olive Oyl throws your way. While she is dropping either hearts, notes, or the letters that spell out "HELP ME", Popeye catches a set number while attempting to steer clear of Bluto, who was renamed Brutus here for reasons unknown. Later levels add the Sea Hag, who drops objects to make life difficult as well. Popeye is given a weapon the Marios and Kongs didn't have at the time as he can swing his mighty fists at anything that moves with the exception of "Brutus". To take that huge, burly tub of fatfuck down, there is one can of spinach per level that will make our hero red-dog mad enough to knock the big man halfway across creation. The stages are varied enough to stay fun and there is even a cameo by Swee'Pea. The music is excellent and when the third stage is clear, you are treated to the signature song, complete with the toot-toot, which is a nice touch and causes the 'Quester to smile everytime. It is obvious that Miyamoto loved the source material and wasn't going to create anything that didn't have the same feel of the classic cartoons he grew up adoring. As with Donkey Kong Jr, this is another port that could've easily been made in 1986 and still been a hit. 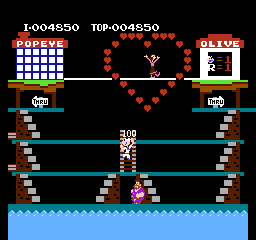 You don't always need to hide and re-load different styles of guns for a game to rock. A great songwriter said it best. All you need is love.

THE FINAL VERDICT
9/10 If that's too high, then create your own blog and reviews and feel free to adjust as you see fit, but I appreciate this game even more now than I did as a kid. The graphics and tunes scream out Popeye and the challenge is balanced enough to make me want to play for hours instead of hitting the road block alot of the ports do where it goes from head-ache inducing to requiring the X-gene. 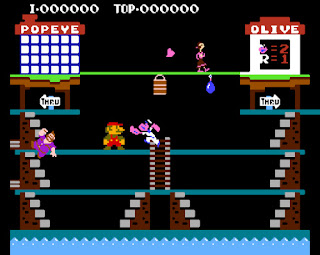 "That paycheck you cashed on the gorilla game was MINE!!!"

Thanks to Mason V. for seeing my post and contacing me about having a double, thereby saving my ass on this one! Folks like you are the ones I do this for. Fuck you Ebay! (Until you are the only place I am able to run to in the future. I'm an honest hypocrite like that.) 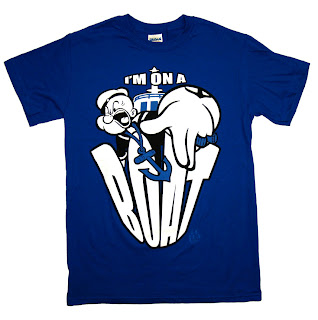