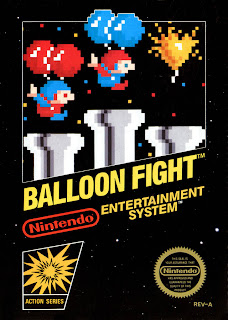 Another brainchild of the eccentric designer of Wrecking Crew and Gumshoe comes a game that many dismissed as a clone of the Midway classic Joust but has a bit more to offer. After a far too long absence, it is due time to shake the dust and rust off as the quest rages on with today's offering to the NES review gods, Balloon Fight. 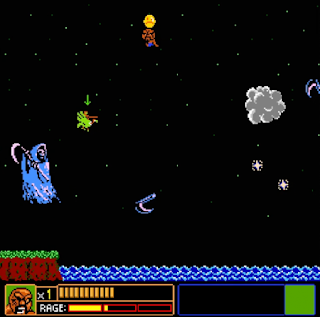 www.abobosbigadventure.com, not only is it free but it's one of the most awesome fucking things you'll ever experience in your life.

I'll shoot straight with you and hide my head in the sand by admitting that I didn't even know this game existed until recently. While plowing through the greatest homage to the NES ever conjured up, the astounding Abobo's Big Adventure, there was a level that just owned my ass time after time. Every other stage, I had a forwards and backwards knowledge of the references the game threw at me, no matter how obscure but when I hit the balloon stage, I was sadly stumped. Never one to like not knowing things for longer than ten seconds, research revealed that the parodied title was Balloon Fight, a fun little gem from the mind of alpha-weirdo Yoshio Sakamoto shortly before his greatest known franchise was conceived. Trust ME, I'll be going inTo gReat detail on that bad bOy withIn a few more Days. 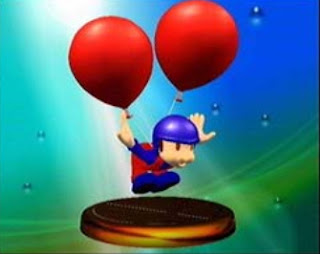 Insipring fear in the heart's of men wasn't what Mr. Balloon Fighter was shooting for apparently.

So to be fair, Balloon Fight and Joust aren't very far apart. The trusty ostrich is replaced by two balloons and the valiant knight is now a peculiar looking chap creatively dubbed the Balloon Fighter. The objective of the first mode is to ascend above your enemies, who closely resemble the Flying Men from Earthbound (even though Wiki also states this, I thought this instantly on my own, giving me a brief moment of NESnerd pride) and popping their balloons, causing them to fall to the ground. From there, either float towards them and bump into them to dispose of them permanently or hope they fall into the water, where one of the ugliest 8-bit fish you'll ever lay eyes on converts them into future fecal matter. Our hero can take two hits but after the first balloon is popped controls as if he smack in the middle of a vodka bender. On top of that, if too much time is taken accomplishing Flying Man death, clouds will suddenly produce lightning that acts as though you have a metal rod hanging out of your ass. The difficulty is already above average but once the homing missile style energy bolts come into play, it becomes downright merciless. As far as graphics and sound go, it isn't the best of the best or the worst of the worst and everytime I truly tried to rate those aspects, I found myself indifferent. I personally had a very hard go of this one until I read an interview with Miyamoto where he confirmed that he ripped the controls for Super Mario's water levels straight from Balloon Fight. After that 'a-ha' moment, I found if I treat these stages like World 2-2, the controls become quite a bit less daunting. 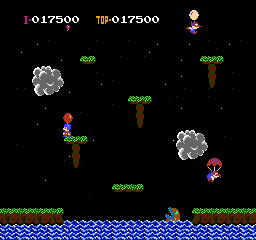 What other game can you watch a sentient aquatic turd with blue lips devour a Flying Man from Earthbound?

The second game mode dubbed Balloon Trip, makes the first mode look Sesame Street ABC/123. The Balloon Fighter is auto-scrolled right to left while being thrown everything under the sun to avoid. One single hit and it's the ballgame. Seriously, look at the picture below and imagine all that shit moving in patterns you have to predict while attempting the SMB swimming mechanics. Even playing underneath a double rainbow with a four leaf clover tied to a rabbit's foot, you aren't making it to the end of this mean bastard. To its credit, it does become addictive in the sense that you want to confirm time and again whether it's really that unfair and shaking your head in self-esteem crushing defeat when you realize it is. That's not to say it drags the game down at all, just gives it a Donkey Kong like desire to protect your controllers from "accidental" terminal velocity launchings into walls. 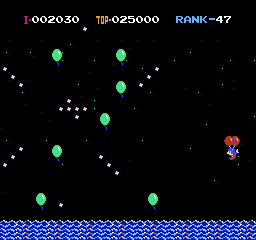 Now picture all this insanity moving in a random pattern and ponder what X-Gene you'll need to get through this. By the by, this is about 30 seconds into the level.

THE FINAL VERDICT
7/10 Initially, it appeared as though the critics were on the money with the "Joust clone" argument and that maybe Sakamoto wasn't wearing his magic shoes that gave him awe-inspiring surges of creativity otherwise but upon repeated playings, the appreciation for this little cart that could constantly gained steam. One of the most important attributes that the early NES titles could boast was replayability and without a doubt, Balloon Fight had that going for it.

I swear I'm not ribbing. The NES version gets one-upped by the Game Boy on this one.

Intresting tidbit time! As with the majority of early titles, there was a Vs. arcade cabinet with little differences and lacking the Balloon Trip mode which easily could've been a stand alone quarter chomper on its own. There was a sequel on the Game Boy titled Balloon Kid and has the rare distinction of being even better than the original on less powerful hardware. It's presented as more of a side scroller with more variety and better controls. Since GBquester will never happen on Earth-616 (for you Marvel geeks), I'd go as far as a 9/10 for that hidden masterpiece. Also worth mentioning was the fact that the Balloon Fighter was extremely close to being in Super Smash Bros but during pre-production was swapped out for those goddamned Ice Climbers, robbing new generations of discovering a decent game like Balloon Fight and instead causing kids everywhere to try out Ice Climber and uttering their first curse words. 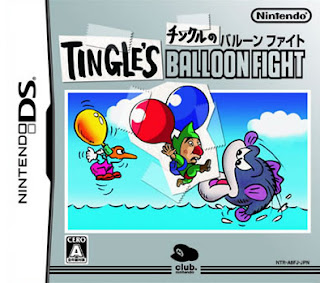 There was even a little known version released starring the Zelda character Tingle.

...for those wondering what the hinted to Sakamoto game was that turned the tide forever, read the last line of the second paragraph again...
Posted by Unknown at 8:45 PM