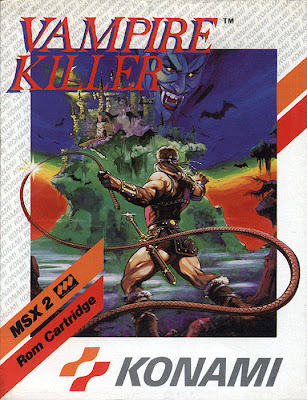 Metroidvania is a well-known portmanteau celebrating the awesomeness of the non-linear side-scroller popularized throughout the years. Your friendly neighborhood NESquester was pondering exactly how this term came to be coined as Castlevania was a very point A to point B type of experience. More extensive research into the legendary series led me directly into the waiting arms of a title only touched by Japanese and European hands and gave me the exact answer I was seeking. Exclusive to the wildy beloved MSX2 computer platforms, today we are going to sink our teeth into (pun very intended) a footnote in gaming that should be shitloads more popular than it is, Vampire Killer. 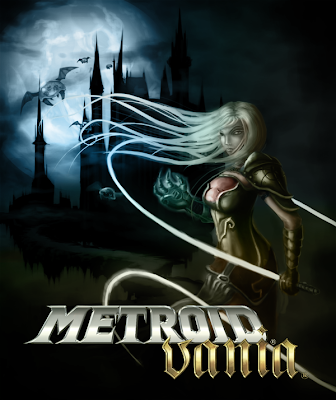 In a first for me, there is no need to go into my normal spiel concerning the storyline and development team as it is 100% the same crew that worked on the version released one month prior for the NES. Thankfully, they are given full credit here and not the ridiculous shit that they were saddled with during the end of Castlevania in a failed attempt at humor or whatever that was about. Imagine busting your everloving hump for a year of your life only to be tossed the back-asswards moniker of Vram Stoker. I imagine that must be close to how the poor kids in WWE must feel when given their new ring names. See below review for all the goodies! 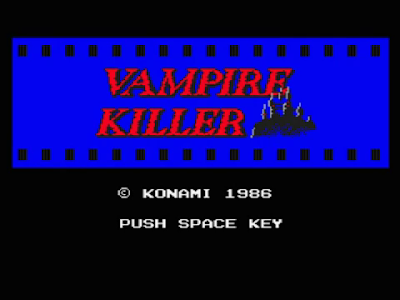 Not knowing what exactly to expect, the title screen resembles that of the Japanese version of Castlevania. Our hero, Simon Belmont takes the famous walk to the gates of Dracula's castle just as before and the familiar music widens my smile as always. The first screen is territory that has been traversed on countless occasions so it appears that the second game of the Castlevanianseries is just a port named after Simon's whip right? 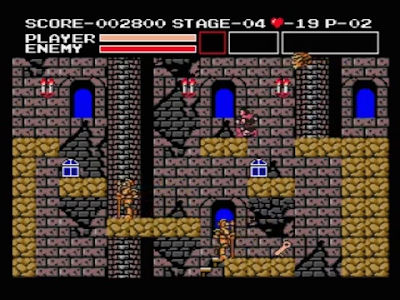 What in the name of FUCK just happened? 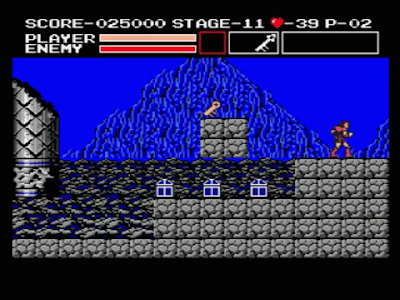 Eenie, meenie, miney, moe it is!

Keys? Treasure chests? Whip upgrades rarely available? Multiple stair cases? What the fuck happened to my Castlevania? Turns out that Vampire Killer is kind of like if you were married to a twin and they tried to pull a switcheroo on you for shits and giggles. The outer shell looks like the person you've come to know and grow older with but the inner workings like personality could never match up no matter the amount of effort went into the hoax. Don't get it twisted however, this is akin to both twins resembling Kat Dennings. Jackpot, my lucky retro gaming friends. 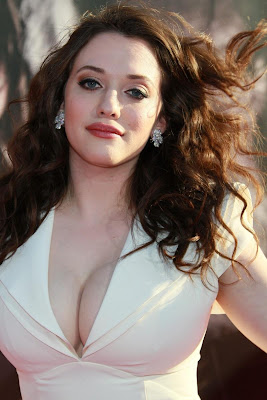 In order to progress through each level, the skeleton key must be found, identified by its white color as the others to open chests are yellow. Remember being younger before this fangled internet machine gained steam and Nintendo Power debuting having to do things like toss the candle at every single bush in Legend of Zelda for any and all ways to bring everything you had at Ganondorf? Get ready to break some walls until your fingers are numb because that is where the keys are located now in place of food. Once again, we are given six levels of atmospheric good times in gothic Transylvania with three sections per level to conquer. Even if you are the current and reigning champion of the original Konami offering, you will be forced to think outside the box with Vampire Killer. George Lucas is the devil! Fucking KNEW it!!!

Another major difference are the new form of puzzles that lie within. Simply procuring the skeleton key isn't a guarantee that Mr. Belmont will advance to the next insanity test he has. Mr. Nagata clearly had a blast with his level designing as sometimes just getting to a wall you think MIGHT have the required key will induce migraines. One stage in particular forces you to fall into a pit (some shit you'd never dream of trying in the original) and plummet a few screens to land safely in front of the wall containing said item. What can make it even more maddening is that the levels are on an infinite loop so more often than not, the player will be struck with that "Deja Vu? Huh? Oh, fuck me running!" feeling. You know exactly what frustratng emotions I speak of. 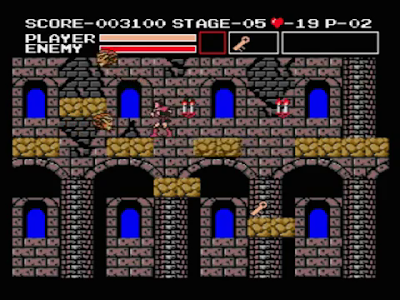 Strategy also comes into play as there are a few more weapons Simon has gained mastery of. The pisser however, is if you throw, say, the Axe and don't catch it upon it's return, it is removed from your inventory until you obtain it again. I was less than thrilled about that but then Vampire Killer REALLY sticks it in and breaks it off when there are no extra lives and no continues. Luckily, there are a few bones thrown at you as you can tote around more than one item at a time, which comes in handy. Many new ways to improve Simon's position exists here, such as wings to make him jump higher and boots that add speed. I reckon someone took the month inbetween games to remind Simon that he wears a belt for a reason. Sub-weapons can still only be held one at a time but it isn't that big of a bother as only the Stopwatch and Holy Water are present assisting in using some of the same tricks us old dogs know. Medusa Heads + Stopwatch = NESquester not wanting to immediately atomize the first cute thing he sees. Precursor's to Simon's Quest begin to show up as well such as hearts now used for currency and the scattered merchants closely resemble the old woman sprites from Castlevania II. Buying from them is one of the more bizarre aspects to the game as you stroll up to where they sit and simply beat the piss out of them until they turn red and deal. Well, alrighty then. 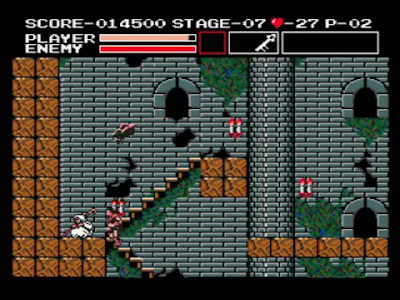 "Gonna gimme some goodies or does Simon Belmont have to whip a bitch?"

Castlevania always sported one of the greatest rogue galleries in gaming and nothing has been altered here until the end. Giants bats, Medusa, Mummies, Frankenstein's Monster, and the Grim Reaper all make their valiant returns here to insure that you are needing a new keyboard before long and move about in around the formations we are accustomed to. Dracula himself added an extra stage to his castle just to be a true heel and his first form hasn't changed other than the fight taking place in front of an ominous looking portrait or the Prince of Darkness. Then again, maybe it has nothing to do with him because the figure you're fighting looks more like a zombie with a cape while the painting is rather close to Count Chocula with Great Tiger's gem embdedded between his eyes. Take out the first form and the background comes alive and starts shooting bats at you at an insane rate of fire presumably as revenge for the death of the beloved Wampa Bat in the NES version. 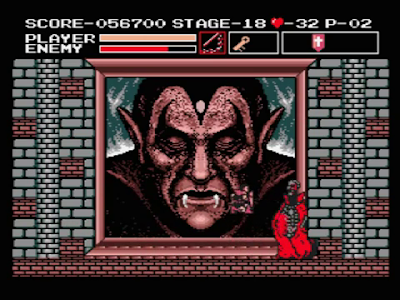 "I vant to eat your cereal!"

The gameplay and presentation aren't that much different though there is definately one MAJOR bitch I have to get out. Vampire Killer requires the player to press up to jump, which can be absolute hell if you're trying to jump near a staircase and Nagata put stairs EVERYWHERE. Many was the time I red raged because when attemptng to jump over an obstacle only to begin my slow climb up or downstairs surely making Dracula cackle his undead ass off if he was watching. That graphics are better by just a bit as the trees look more like trees and the laboratory level simply steals the show. Kinuyo Yamashita's classic soundtrack is unchanged and as haunting as ever insuring great times to be had by all. The challenge is the most difficult aspect to compare as some trials and tribulations take less effort than before and some more. I will state for the record that Count Chocula is a hell of alot easier than Wampa Bat. 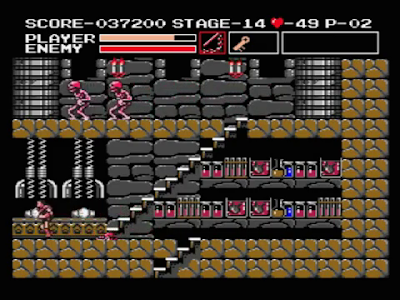 The graphics in the lab truly shine.

THE FINAL VERDICT
9/10 NOW I finally understand where the Metroidvania term came from. A sense of exploration not seen since the original Metroid but with the shiny coat of Castlevania over it makes this an instant classic in my books. The one point is due to the up button/staircase misfire but with time and patience, it can be overcome and overlooked as this was head and tails better than most of what was around in 1986. Vampire Killer definately laid the groundwork for countless future titles and should be regarded as right up there with Castlevania. If only THIS was labeled Castlevania II but, yeah, I still need to review that bastard child don't I...