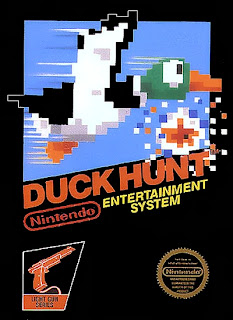 
Arguably the most fondly remembered of the Light Gun Series, here is a title that needs no introduction. Coming equipped with a ton of history along with one of the most despised characters in gaming history, Duck Hunt. 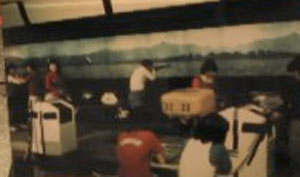 A happenin' Friday night in Japan!

The innovations behind the electro-mechanical series of games were previously covered with Wild Gunman. Predating even that was a wild creation dubbed the Laser Clay Shooting System. Nintendo intended this to be its cash cow years before the NES, but one hell of a recession hit overseas and instead, they lost millions. The premise was the same as the electro-mechanicals, except they was presented on a much grander scale than an arcade cabinet. Nintendo bought up a significant number of deserted bowling alleys in Japan and converted them into virtual shooting ranges. Overhead projectors would flash the image of a duck on the forest, valley, or mountain backdrop. A successful shot and the image would appear to fall to the ground of the varied landscape and a point would be tallied. The game proved to be an overnight sensation and Nintendo, not one to pass up a good thing, quickly bought up every bowling alley they could find. Unfortunately, the 1973 oil crisis hit and Japan as a whole took a major financial hit. No longer able to get even preliminary construction funded, the losses were huge and took years to recoup. 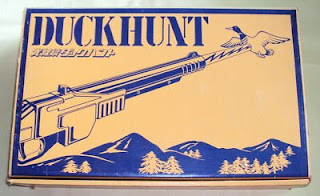 How did the Zapper NOT take off in the 70s?


Thankfully, the vision wasn't completely lost, as "mini laser clay" systems debuted a couple of years later, giving the same thrills of the original on a smaller scale for an economy on a budget. A home version of Duck Hunt was even released with a mini projector and an early version of the Zapper. 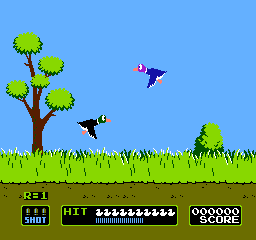 Avian slaughter at its finest.


Roaring into 1985, Nintendo decides that on top of Wild Gunman, it would drag the Duck Hunt concept out of the mothballs for it's shiny new system. The game's rule are simple, choose one or two ducks as target practice and let 'er rip! Three shots per round are given and if you fail to bag any fowl, you get the pleasure of meeting the object of intense psychotic hatred for many youngsters, the "Duck Hunt Dog". He wasn't the first character to laugh in our face for below average play but he sure is the one most remembered. The snarky hand over the mouth and the "you're a dipshit" giggle is known to just eat at your soul. Prior to the start of the round, you are given a preset number of ducks to hit in order to advance. The firing sometimes seems a little more off than other titles and there will times you swear on all you hold dear that you hit the damned duck, only to have the dog act like an asshole yet again. The gameplay is easy and effective but lacks the variety of other Light Gun titles. Clay shooting is the third mode but is far less fun than it's cartridge companion and can pretty much be gathered completely by a screenshot. Graphics are cartoony without looking cheap and the music is top notch on top of being as recognizable as any other sound effects out there. 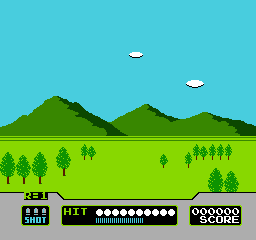 Yup, it's exactly how it looks. Ho-hum.


THE FINAL VERDICT
7/10 Not as much variety and a wonky hit detection put this just a notch below Hogan's Alley and Wild Gunman in my book but still a fantastic title. In the first Action Set, this was the pack-in title along with Gyromite, but of course is much better known is one half of a cart shared with the saintly Super Mario Bros. Still worth a play to this day and for nostalgic purposes, there are few better. 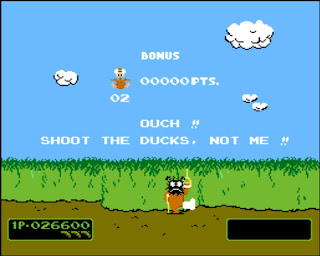 Worth. Every. Fucking. Penny.


As a young lad, before the internet existed, there was a Nintendo Help Line in Redmond, WA. The number was 255-806-7529 and that's without looking it up. My friend at the time, Kenny, got permission from his mom for us to place a call to ask a question of the game counselors. The question that was burning inside of two eager 12 year olds with telephones? "Can you kill the dog in Duck Hunt?" Years later, I found that in the arcade "Vs" version, you can shoot the shit out of that bastard! It counts as a miss but who gives a fuck? Feel free to insert a handful of quarters and light that little bane of everyone's existence up for hours! The dog also had a cameo in Barker Bill's Trick Shooting where he could also be shot but, personally, it just doesn't look anything like him, and I've stared into that soulless parasite's eyes many times. KILL! 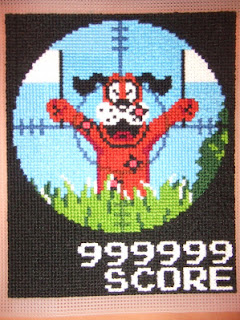 The version of the game that kids would've BEGGED for in the 80s.