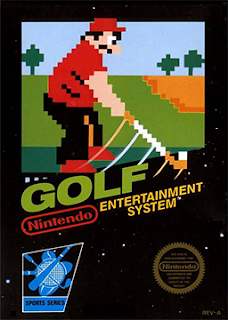 
Good old Nintendo! If you thought Pinball was a shameless shill with its box art, witness a Black Box title made up to look like Mario himself was in the starring role. More on that later so for now, throw on your most hideous slacks, grab a funny hat, and let's take a quest through the last of the launch day titles left to review, Golf. 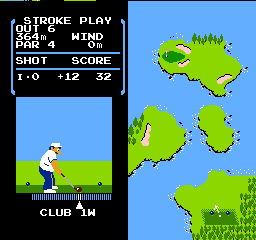 I'm about to get more balls wet than "Cavestretch Party Night" at a Kardashian house.


Though it seems (pardon poorly produced pun) predicated par (alliteration as well) for golf games nowadays to display a power meter, this was the title where the power system made its debut. It's Golf, so you dig into 18 different holes with a set of clubs in an attempt to get a little white ball in the little black hole really fucking far away. No dragons, eggplants, or fireballs to worry about here as they are replaced with feared foes like water and sand. To add variety, the two player game gives the option of stroke play or match play. I do have to come to Golf's rescue in one regard as quite a few reviewers have razed it's difficulty concerning how far a given club will hit the ball and to that I propose you put the emulators down for a moment as the game comes with a nice, shiny manual complete with a chart detailing estimated yards each club will send the ball. 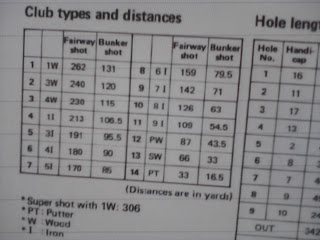 Game manuals have info! Trust me!

The courses themselves are vibrant and damned challenging at times. Wind direction and velocity also play a major role and if you're caught going Happy Gilmore without first checking the way the wind doth blow, grab another ball, because yours just landed at the bottom of Lake Nintendo. What I found most unsettling was that even with the knowledge of how far the ball should go, it doesn't always work out in my favor. Sometimes, the ball even seems to become self-aware and mid-air can treat a 10mph wind like a hurricane gust. Like Tennis, the ball is given an excellent amount of depth so that it's not just a moving dot a la 10 Yard Fight. Also similar to Tennis is the fact that there is no music whatsoever, but in golf, the silence is a much better fit. Prior to questing through this one, I had little to no knowledge of how to play golf, but honestly, of all the Sport Series, this is title I enjoyed the most. Sure, there are times you'll swear the destination hole is a Sarlaac Pit and the ball is Boba Fett but why make it too easy? Putting is a blast as the creative solution was to make arrows on the green itself to emulate the slopes in a 2-D world. There is a definate learning curve here but sticking with it and getting your first birdie offers a distinct feeling of reward games need more of. 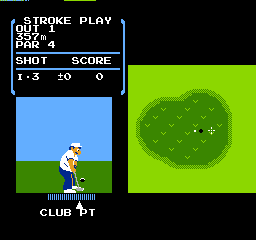 Doubt I'd complain if a game where you only got to putt was released.


THE FINAL VERDICT
7/10 Just the fact that I enjoyed playing Golf more than the sports titles, whose rules I began much more familiar with, should say alot. The wind can be unforgiving and some of the courses are straight from Hell itself, but the fun factor never fades away. The lucky shots that can be pulled off to conquer the rougher of courses will make you jump for joy when they happen, which is honestly one of the greatest moments anyone can have as a gamer. I doubt you'll see the NESquester playing a full 18 at a course near you soon, but as far as the Sport Series games go, Golf easily rose above to claim the title of the best and I see myself going back to kill time on the greens more often than not. 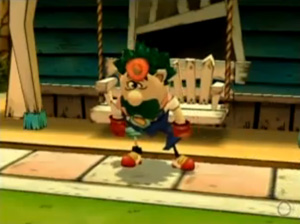 
Remember how I opened by bursting the bubble concerning the very Mario-looking guy on the cover NOT being Mario? What you see there is the second player, as the first sports a white shirt and hat with blue pants. Sure as hell looks like Mario and the world for years believed that he was indeed our favorite Italian plumber but meet the star of Golf, Ossan! In 2008, Ossan accomplished what not even Mach Rider could do and staged a comeback. Captain Rainbow, a Japan exclusive Wii title, featured a hero who traveled from island to island helping old NES characters out of their own personal predicaments. Never ask me about the Birdo chapter. Ever. So, the Captain runs across none other than Ossan, who greets the hero outside of his golf themed pad by...vigorously scratching his balls. Yes, you read that right. Ossan's fabled clubs were misplaced and he requires help finding them to resume his golf game. Seeing as he never had a caddy, he stuffs his golf balls down his trousers, where they become rather abrasive over time and start to itch. Every good itch needs to be scratched and to say Ossan isn't shy about it is an understatement. Maybe Mach Rider should count his blessings he WASN'T revived... 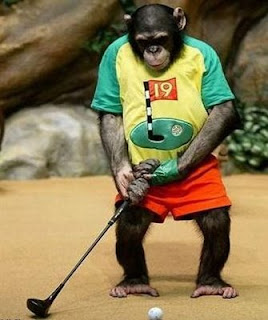