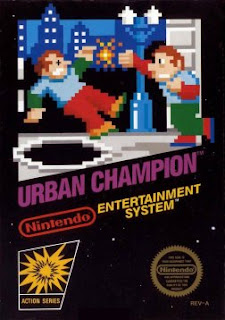 
Everything has a beginning. A polite smile met across a table can be the earliest sign of love, a single seed is possibly the start of a fruitful garden, and the entire Taco Bell menu is ususally the genesis for some white-knuckled, sweaty, "why God why" screaming shits. Today's Black Box offering is where Nintendo's 2D fighting genre's roots lie, Urban Champion. Welcome to a full 8 months after launch day as "Wave Two" is upon us. 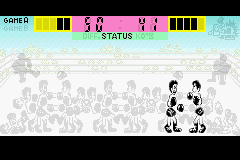 Think this looks antique? Trust me, it doesn't get a whole hell of alot better.


Urban Champion has roots of its own planted in the classic Game & Watch series. These were handheld portable games created by Gunpei Yokoi, who has gotten plenty of love here, designed to give the feeling of an arcade title in the palm of your hands. They were great fun for the time and even got recognition as a very strange character in Super Smash Bros in later years. The Game & Watches strongly resembled the much later design of the DS, proving that Yokoi was from the future and we weren't quite ready for him. One such title was Boxing, later changed to Punch-Out to cash in on Nintendo's at-the-time arcade phenomenon. Lightbulbs went off aplenty at Nintendo's R&D 1 department and the think tank decided to attempt to translate the controls of Boxing to the recently launched NES with Urban Champion. 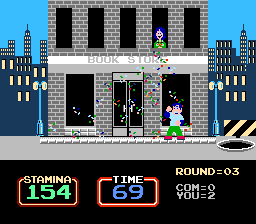 "All hail the BAMF of all bookstores!"


Cutting right to the chase, this game is notorious for being the equivalent of someone opening the cart, shitting in it, closing it back up, and shoving it inside your console. Is it really that bad? In short, yes. You begin with two nameless fighters who have a humongous unknown beef  with each other and wish to settle it using good old fashioned fisticuffs. You're given a light punch, hard punch, and two levels of block, which are worthless. A stamina meter also is present but never comes into play because your goal is not to lay your foe out like any other game normally involving pugilism ends. Instead, we must master an ancient technique perfected and taught in front of Japanese barber shops and discount stores for centuries where you hit your target so hard, they do a 7.9 Olympic backwards roll into the next screen. This continues ad nauseum until you send the grasshopper on your right flying into a manhole cover. Along the way, crazed dwellers of the properties you're fighting in front of wish to reclaim their street and attempt to drop flower pots on your noggin. If life was low enough to where I'm living on the second floor of a fucking barber shop, free UFC in my front yard would be more than welcome, but that's just me. Adding to the absurdity are the random visits by the police, prompting both fighters to walk to either side of the building and stare at the sky innocently until the lawdogs have safely passed by. Could you imagine this crap going on in Mortal Kombat? "GET OVER HERE! Wait, the po-po's". The graphics are just as uninspired as the scenery ever really changes except the palette swaps and signs on each building. As unoriginal as those get, the fighter variety is even worse as there isn't any whatsoever. You fight the same green haired clone from round one to round one million. Audio is just as bad as a lazy tune accompanies the "action" while an out of place happy melody plays inbetween rounds. Like most the early titles, there is no ending, but unlike Mach Rider, after round 99, I still could give two fucks what happened to this character after the dust settled. 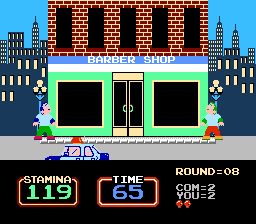 If it were for comedic effect, I would've died laughing. But it wasn't. So I didn't.


THE FINAL VERDICT
2/10 A complete misfire by Nintendo in every way. The game is just goddamned boring and while it may be fine to waste 5 minutes or so on today, this was a time where games were major purchases and kids got stuck with what they had. The Big N knew this and still unleashed this fecal folly onto the world. There exists no sense of anything more than button mashing until your brain hits that special point where it stops and asks you "why the hell are we doing this?" Urban Champion may as well have been named "Paper, Rock, Scissors". The fighter you control was never seen in any form or fashion other than being a level in Tetris DS and good riddance, you worthless shitstain of a great era. 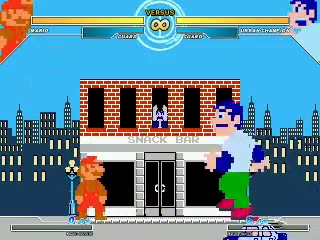 If Mario hadn't eaten the mushroom first, I shudder to think...