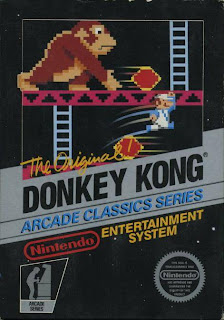 Without our next entry in the quest, there wouldn't be the Nintendo we all love and worship today. Their ventures leading up to this ground-breaking title were met with mediocre success at best. This is the one that blew the doors wide open to The Big N becoming a household name. Grab a mug o' your finest joe and kick your feet up ladies and germs. I only have two words for you. Donkey Kong.

This poor thing had no idea it was destined for one mother of an identity crisis...

Gather around the bard's hapsicord kiddies, it is without a doubt history time if there ever deserved one. In 1980, after noticing that American arcade sales were starting to explode, Nintendo decided to ship overseas one of their first games, Radar Scope. It wasn't a horrible game by any stretch, as it played like Space Invaders had a baby with Galaxian. Arcade vendors also felt it was too similar to titles already owned and Radar Scope  flopped. Desperate not to lose their collective asses, then President of Nintendo, Hiroshi Yamauchi, approached an amibitious young employee named Shigeru Miyamoto about the possibility of creating a new style of game the public might want. To insure everything ran smoothly, one of this blog's heroes, Gunpei Yokoi, was given the task of overseeing whatever new product Miyamoto decided to begin. 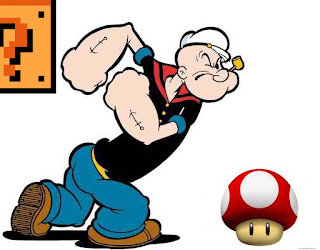 It may shock the everlovin' hell out of you how close we came to this...

Nintendo was actively pursuing the Popeye license (who Miyamoto was a huge fan of) from King Features to base a game off of but couldn't aquire the rights in time. Miyamoto thought using the same dynamic would work and switched the established characters he loved to new unknowns. Popeye was now Jumpman, Olive Oyl became Pauline, and Bluto morphed into Donkey Kong. The outpouring of creativity and the large direction the vision was taking should never be overlooked. Noone had written a story first and a game second at the time. Miyamoto was determined to give the player a true sense of urgency to rescue the damsel in distress. Industry champion Pac-Man provided small cutscenes but the mad scientist's initial game offering was the first where the scenes advanced a story. Being that it was 1980, Donkey Kong was hands down the most massive game anyone had ever attempted, so much so that at points, programmers pitched a bitch as they felt that they were making four games instead of one. While Donkey Kong was definately breaking new ground, some innovations at the time were already present in lesser forms. Common misconceptions are it being the first platform game (Space Panic debuted in '80) and the first to feature multiple levels (space shooter Gorf came out a few months prior), but neither of those were near the scope of this beast.Nintendo was understandably squeamish about the American market after the Radar Scope debacle. so set up two Donkey Kong cabinets in seperate bars close to Seattle, where their U.S. headquarters were located. Within the first week, it became abundantly clear that they had scored a huge hit and went about the batshit insane task of coverting 2,000 Radar Scope units into full-fledged Donkey Kong arcade machines. Nintendo, having confidence in the product but not expecting an overnight phenomenon. had only SIX people to do the coversions. So it goes that in a storehouse in Redmond, WA, somehow, someway, the goal was met and paid off huge. Donkey Kong's rise to the top was nothing short of meteoric. By the summer of 1982, there were over 60,000 Donkey Kong machines in the world, finally cementing Nintendo as a major player for good. 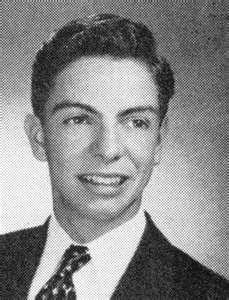 It's-a me! The LANDLORD! Much more feared than Bowser I think.

There are so many conflicting reports as to where the Donkey Kong name was originated that it's best left up to your imagination. Jumpman, of course, is another story entirely. Having to shift all of their money into the cabinet conversions along with the labor going on in Japan, Nintendo fell behind on rent at the Redmond storehouse and pleaded with the landlord, Mario Segale, to give them some time with the promise rent would be paid. Mr.Segale agreed and his kindness and patience was re-paid by giving Jumpman the now iconic name of Mario. Noone knew at the time that the landlord's namesake would go on to be the most recognizable figure in gaming history. The programming of Mario proved to be the trickiest as a stationary ape and lady wasn't too taxing, but attempting a jumping, running, hammer swinging figure was unheard of. Instead of a mouth, which noone felt looked quite right, a moustache was given. Issues were present in the choices of hairstyle, so the problem was easily rectified with a hat. Last but not least, overalls were designed so the jumping animation came off more realistic. All of these distinctive traits were conjured up within a few months of development and amazingly are all still in place to this day as any changing of the signature look would no doubt be met with extreme rage by The Big N's loyal fans. 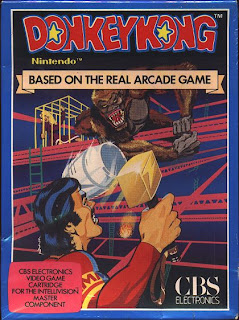 If anyone thinks the out-of-place attire on the NA box art was bizarre, check out the weird shit going on with the European Intellivison cover!

Seeing it would've been completely foolish not to bring the smash hit to the new concept of home consoles, Donkey Kong was one of the Japanese Famicom's original three launch titles. In case you've been in Amish country your entire life and just ventured past the fields onto this dazzling internet thing en route to your first arcade, I'll explain further. The gameplay mechanics of Donkey Kong are quite simple. The option other than moving the standard four directions is to jump, which as you can imagine, a guy coined Jumpman will have to do a bit of. There are only three levels on the NES cart (exactly the same game as the FC port) as the "pie level" was cut. It wasn't removed due to a hardware limitation, but rather programmers not knowing exactly how powerful the system was at the time. Sill, Donkey Kong may have been licensed to every major console at the time, but the NES version ruled the roost in terms of faithfulness. Differences other than a missing level are a little less obvious such as cutscenes not taking place, a lack of blue barrels, and the question asked between levels that I couldn't answer until college. 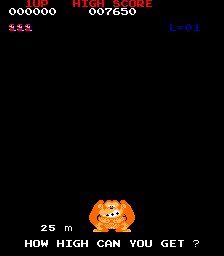 The difficulty of Donkey Kong is a thing of legend. The fascinating documentary, The King Of Kong: A Fistful of Quarters displays this perfectly as even the most battle scarred gaming gods fear and respect the Billy Badass of barrell-chucking gorillas. On the NES version, you are presented with two modes of difficulty, but c'mon it's fucking Donkey Kong, so they could just as easily be labelled "Hard As Fuck" and "Motherfucker" on the title screen. After being welcomed to game by the theme to the classic Jack Webb show, Dragnet (Miyamoto = off the charts weird on his best day), the fun begins. Mario, before his plumbing/construction/referee days was a carpenter who owned a pet gorilla named Donkey Kong. DK feels he isn't being treated right and instead of running away and living out his life being mistaken for Bigfoot, decides to hit his owned where it hurts, his nookie. Pauline is kidnapped and forcefully taken atop steel girders and away we go. The first level is fairly straightforward as the goal is for Mario to ascend ladders while leaping over barrels that can be brutal in their patterns. Grabbing the hammer can help rack up points and alleviate stress but not much else as once it disappears, the onslaught of barrels continues until reaching the top. The second level is personally the toughest. Mario must jump from moving platform to platform with little room for error and the closer to get to Kong, the real bastard diffculty comes into play. Running under the bouncing whateverthehelltheyare's at the top requires a mutant gift of timing and will wear patience thinner than Victoria Beckham in a room stocked with toilets and plastic fingers. Level three is where Mario has an epiphany by realizing that removing all of the girders from the platforms DK stands upon, the gorilla will plummet to his demise until the next level where we do it all over again. On the way up, a different fireball than previous levels will cause you grief but can be taken ou"t with another trusty hammer. If points are your thing, Pauline has dropped a bunch of crap you can pick up on your way to simian revenge such as an umbrella and a handbag. Sound effects are minimal and you'll develop a love/hate relationship with the indescribable sound made when Mario runs. 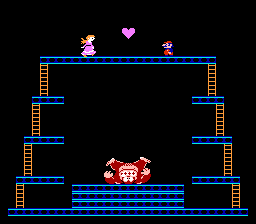 "ARRGGHHH!!! WHATEVER YOU DO PAULINE, DON'T LOOK DIRECTLY DOWN!!!"

THE FINAL VERDICT
8/10 As influential as the original Star Trek series may have been, it can appear awfully dated and some of the special effects can even be considered laughable by today's standards. Yet it holds a special place in anyone's heart who was alive in front of a television when it originally aired. That's exactly how I feel about Donkey Kong. I've seen enough summers pass to vividly recall playing the arcade version everytime my mom took me with her to the local laundromat, rewarding my half-assed clothes folding with a shiny quarter that lasted about the time it took for her to get the clean clothes back in the car. It may have been harder than trying to juggle Jello, but I still looked forward to it each and everytime. However by the time the NES rolled out in 1986, it was already five years old and starting to show signs of games passing it by. My heart rates it a 10/10, but my mind says it has three levels when another game released in America eight months earlier, Super Mario Bros, had 32. That's not to say this game doesn't rule, it just isn't a 10. 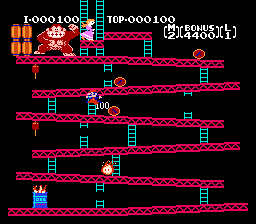 It doesn't get much more classic does it?

While Donkey Kong remains of the most visible of Nintendo's flagship characters nowadays, it's hard to imagine that he laid dormant for over a decade. Rare, a British video game developer was given the option to resurrect either Kid Icarus or Donkey Kong for an uncoming SNES title and after quite a bit of back and forth, showed Nintendo's original mascot the love he deserved with a title that surpassed anything seen on thar hardware at the time, exactly what he accomplished back in 1981. Dk was brought back as the crusty old codger, Cranky Kong but we'll get to the lineage next time and just be grateful for now that he returned. Besides, Kid Icarus Country doesn't roll off the tongue quite as well does it? 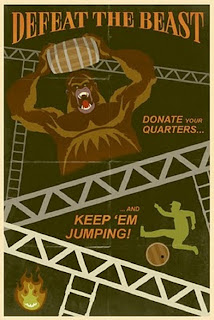 Retro meets retro. Love at first sight so had to share.