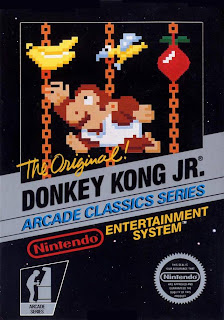 As wise blacksmith once stated, "strike while the iron is hot" and Nintendo had no problem jumping head-first into the sequel of the seminal 1981 classic Donkey Kong with a sequel starring the original mascot's son. Was it the Empire Strikes Back of sequels or the Highlander II? Continuing with the gorilla love, let's look at Donkey Kong Jr. 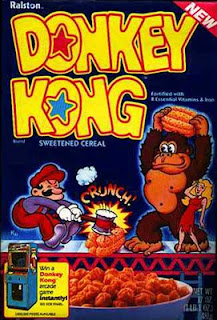 Seriously, DK was everywhere after 1981. Is it just me or does this look like a bowl of Cheetos? Also, should I be worried that Mario's own Mjolnir hammer can't even dent that shit?

Circa 1982, looking to capitalize on the success of the previous year's game-changer, Shigeru Miyamoto wasted zero time in working on the sequel. One of the first ideas that came to mind were to flip the perceived "good and bad" principles around, marking the only time in history that Mario was portrayed as an antagonist. Interviews since have shown that Miyamoto was visualizing the sequel the very second the original had launched and became apprehensive about fans viewing Donkey Kong as a mindless vicious creature. For the next project, he wanted to tell the new chapter from Kong's side of the story by using a newly created son as the hero due to Poppa's sprites being far too large for the desired type of game. The unbelievable popularity of the landmark first title also gave Nintendo the confidence to let the mad professor work without Gunpei Yokoi on his new vision and the results were equally as spectacular. More sprites, more animations, more enemies, and more of pretty much everything else introduced the year prior made Donkey Kong Jr just as popular, financially and critically as his old man. 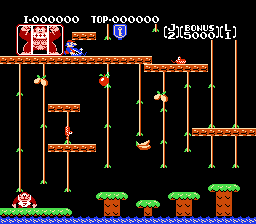 As easily identifiable a stage as any in gaming history.

Everything Donkey Kong did, Junior does better. Another Famicom launch title, the port over to the NES is damned near perfect, only missing the opening and between stage cutscenes. Again, you are given only a jump button but this time the items around you can be used as weapons instead of points, making for intresting new strategies. Two levels of difficulty are selectable but no worries because this one is nowhere near as hard as DK. All four levels from the cabinet version are not only present and accounted for, but translated wonderfully. This is precisely what a port is supposed to accomplish. While playing, I truly felt like I was playing this at the arcades all over again. The story is simple as Mario wants revenge for the traumatizing of his nookie and captures his former pet, locking him in a cage to prevent another incident. His son, a smaller version sporting a wifebeater wth a J on the front, does what any good offspring should do and launches a rescue mission. The first level has Junior traversing vines while Mario sends Snapjaws, a mobile self-aware bear trap, to end your attempt at rescuing Poppa. To truly get the feel of the arcade, play Game B and marvel at the amount of shit Mario sets loose on you. Controller launching hard? Hell yeah, but unlike parts of Donkey Kong, somewhat beatable with a sense of accomplishment upon doing so. Speaking of, level two is almost a call-back to the first game with a strangely timed jump onto a moving platform that must be performed before the meat of the stage truly takes place. Once across the tricky leap, flying gencodial birds named Nitpickers fly across the screen using their offspring as weapons at an astonishing rate. One can only assume the poor creatures have genitals the size of their heads to constantly be able to shoot out eggs. The next level is just awesome as Junior must reach the top of a what can only be described as electrified conveyor belts dodging sentient sparks that Mario unleashes. Of the early NES titles, the music offered in this section stands above most, as it's almost dubstep without being dubstep. Skrillex is the bane of musical existence but if he ever tried his hand at bittunes, I'd probably convert. The final stage is where the keys to unlock the cage holding Kong are moved upwards by a climbing push with Nitpickers once again trying to avoid the responsibility of extra mouths to feed with their incessant egg dropping. It is a nice sense of balance with the last stage easily being the hardest because not only are the Nitpickers up your ass, but the Snapjaws return to make life fairly difficult. Even death has its own strange reward because DKJ's demise is one of the most memorable in gaming history with his crazed looking eyes still cracking me up 30 years later. 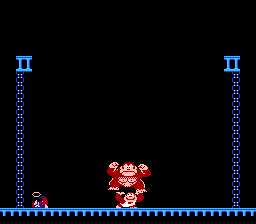 One may safely assume DK mated with a living, breathing steroid needle for his offspring to be so damned strong. Miyamoto was strange enough that the fact of that scenario not being totally out of the question is insane in and of itself.

THE FINAL VERDICT
9/10 Donkey Kong Junior is far and away a better NES port than the original. The graphics are gorgeous along with being well conceived and ahead of their time enough to hang with games developed a few years later. My honest opinion is that this title could have come out in 1985 and easily withstood much of the competitition it would've had to contend with. This version was beyond faithful and begs the question that if this was also one of the three Famicom launch titles, why was so much cut from Donkey Kong but just about everything present here? Of course, this more than made up for the fucking math game. 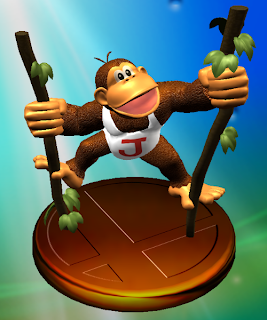 "So one night, while sharing a bed with Funky and Lanky, I had a dream that I was climbing vines..."

While DKJ himself wasn't heard from again until the first Mario Kart, his presence is felt to this day as other  than an errant statement by a former Rare employee and a fucked up line in Donkey Kong 64, all signs point to the Donkey Kong of the Donkey Kong Country franchise being Junior's son. Cranky (O.G.Kong) refers to the new DK as his grandson on more than one occasion thereby making his official name Donkey Kong III. Neat-o how the bloodline continued over the years no? 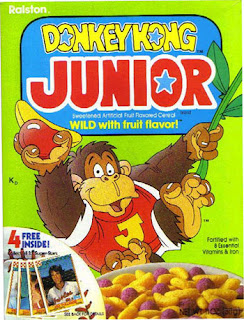 Anyone who ate a bowl recalls one of the best cereals ever released. I tried them both but can barely even remember what I had for breakfast so those memories are long gone I'm afraid. Those bananas sure do make me crave a bag of Runts though.