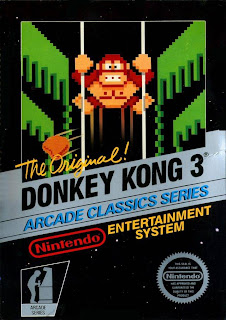 A world without Nintendo in a gamer's eyes is impossible to fathom, however in 1982, it very nearly happened. The president of Universal Pictures, a crusty, cranky codger named Sid Sheinberg, was alerted to the presence of Donkey Kong and felt it mirrored the tale of King Kong too much for his liking. His head lawyer was dispatched to investigate and came back with many solid arguments for Universal to attempt to cash in on the game's success. Steinberg first threatened to convince every company who had licensed DK, such as Coleco, Ralston-Purina, and Milton Bradley to cough up some dough lest they get sued out of existence. Coleco immediately caved and gave 3% of the port's royalties to Universal, unbeknownst to Nintendo. Arnold Greenberg, the president of Coleco, without informing The Big N what he had already gone down, met with Nintendo heads to try and coerce them into giving up some royalties as well. Howard Lincoln, Nintendo's attorney at the time, first thought to reach an agreement with Universal but after discussing the plight with the higher-ups, decided to meet with Mr. Sheinberg and in the nicest way possible, told him to get fucked. Sheinberg, believing he was heading into a sit-down where the result would be a seven-figure check signed over, was incensed and the war was on. Lincoln hired a heavyweight in the lawyer world, John Kirby, to represent them in court. 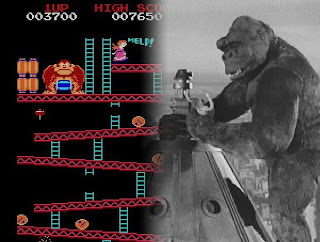 It didn't look favorable for our favorite gaming company one bit.

So it went in front of Judge Robert W. Sweet in a U.S. District Court for seven long days. Universal, the mega corporation gave a case that made Nintendo, the small rising company, seem doomed. Miyamoto himself stated during examination that he was even going to name the game King Kong, because in Japan, that is a common generic name of any large ape, similar to how people in the South call every soda Coke no matter what the can holds. Coleco's settlement didn't help matters either as even they claimed that the two stories were alike in many ways. A massive gorilla kidnapping a helpless female who requires saving while scaling large structures certainly was King Kong in a nutshell and it was starting to look like Nintendo was done for. One problem, Universal themselves didn't even own the rights to Kong and went so much as to state in a previous suit against RKO Pictures that their license had expired and that the Kong license was in the public domain. Major fucking oops. Once Kirby alerted Judge Sweet to this fact, Universal knew they had screwed the proverbial pooch. Not only did Nintendo win the lawsuit but since Universal and specifically the asshole tactics of Sheinberg had bullied and threatened so many on their way to the main suit, were ordered to pay Nintendo $1.8 million dollars in legal fees. Judge Sweet also ripped Universal a new one on their way out the door about their tactics and their knowing full well beforehand that they owned zero likeness and story rights to King Kong. David had successfully slayed Goliath. As a reward for the landmark victory, Howard Lincoln was offered a position as the president of Nintendo of America and John Kirby was given the right to name any sailboat he owned the "Donkey Kong". Mr.Kirby also had a cute puffy pink character named after him a few years later you may have heard of. 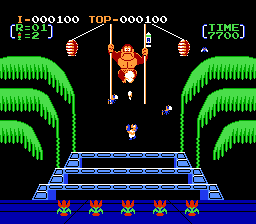 Once the smoke cleared from the lawsuit, the third and final installment of the Donkey Kong arcade trilogy was released in late 1983. Unlike the previous entries, DK3 came out on the home console the same time as the cabinet version debuted. In a radical departure from what brought the Donkey Kong franchise to the dance, the game left its platforming roots behind and was revamped into more of a shooter. Stanley The Bugman is the hero of this one as Mario was gearing up for his spin-off debut later in the year. The story goes that Donkey Kong, presumably just bored out of his skull, picked a lone greenhouse to get some bugs good and pissed enough to want to steal Stanley's plants. As bizarre as the other two storylines were, this one just makes NO sense. My only educated guess is that Kong rocks the ganja and the borders were shut down too long for his liking. Taking matters into his own hands, he convinces some seriously 'roided up insects to fetch the happy plants that Stanley is hoarding. Otherwise, who wants to explain to me why a fucking gorilla would need potted greenery? Stanley in the arcade version is dressed rather similar to Mario with a red and blue suit but for the consoles, his appearance is more in common with Urban Champion wearing a Gracie Ju-Jitsu gi. 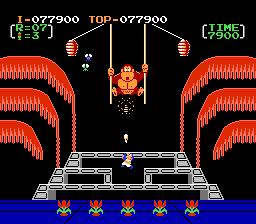 You think there's a chance he may be enjoying it?

The goal is to blow Donkey Kong's high by shooting him repeating up the ass until he reaches the top of the screen, where Kong will either run off to the next stage or have a honeycomb fall on his head in what is meant to be comical. Along the route up the steps of the greenhouse are flies, bigger flies, and worms to contend with. The larger species of fly must be hit twice and upon the second shot, spreads like he was smuggling a gun from Contra. They become the biggest challenge and easilly stand out against the rest of the foes, who mostly fly in patterns that are rather easy to figure out. Every now and then, Kong himself will make life difficult by launching hard-to-avoid coconuts at Stanley. Certain stages will present an upgrade to Stanley's bug-spray making Kong fly up the wines much faster than the initial spray, so perhaps these are reaching somewhere close to yet more painful than his hairy buttocks. I can't help but laugh at the thought of Stanley's face when he realizes his bug spray has limited uses and now is face to face with a gigantic gorilla he's been peppering in the ballbag and asspipe repeatedly. I'd say he's fucked either way. At the end of every stage, the plants left are tallied up and it's onto the next stage that just resembles the last. Graphics are presentable but lacking the imagination of DK and DKJ and the sound comes off with the same uninspired feeling. I know a major lawsuit was cooking at the time but did another game that was obviously of poorer quality than the others really need to be released? The game screens don't even look anything close to a greenhouse. Also, I can't help but to ponder as to how the NES version of DKJ was so faithful to the arcade but this one had  alot more cut from it. The only cut I can see making sense is the arcade's death sequence as the bugs surround Stanley and seemingly eat him alive before flying away leaving only his spray can behind. Understandably, that was creepy stuff for the era but whole enemies and level designs were removed that noone could ever convince me would've eaten more memory than DKJ. Keep in mind, Junior was also an FC launh title, whereas DK3 was not, so the programmers had more time to learn the hardware. 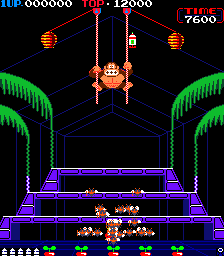 This could've given kids a nightmare or two.

THE FINAL VERDICT
7/10 While I can see how this title has it's fans who could prefer this style of gameplay, it just doesn't feel like Donkey Kong to me. Given the benefit of the doubt, that doesn't make it a bad game at all either. While DK and DKJ may only present 4 levels a piece, none of them have the same feel to each stage like this one does. The colors of the trees change and a platform to stand on is cut from time to time but that doesn't count as progress to me. To put my opinion in a better perspective, do you like Mass Effect? Well, imagine playing 1 & 2 and for the third entry of the franchise being stuck on one planet doing one thing. Fans would flame harder than Perez Hilton at a Chippendales. Finally getting to directly attack Kong IS pretty kickass though, and shooting his gorilla arse to kingdom come probably gave this one an extra point. As an aside, Stanley The Bugman as a character was no match for the Italian plumber and was never heard from again.

Say hello to Mach Rider for me!